Their mission is to help rescue people from human trafficking

A Christian militia group has come forward to assist agents with the United States Customs and Border. Patrol (CBP) who are struggling to handle a record-high number of migrants illegally crossing the U.S. southern border.

Patriots for America is conducting monthly rotations and is working hand-in-hand in Texas with CBP, including the Kinney County Sheriff, according to Fox News.

Kinney County was among six counties in the Lone Star State that have formally declared the migrant surge an “invasion” in a bid to pressure state-level officials, specifically Gov. Greg Abbott, to take stronger actions to secure the border.

The militia group told Fox that they have a good reputation with law enforcement and are running operations in northern and southern Texas to stop the cartel-driven human trafficking that is often targeting children.

“We worked very hard for that reputation, and so I think once they saw that we weren’t just going to show up and leave and that we were there consistently and our message was good, and it hadn’t changed, and we weren’t starting trouble, I think there was a period of testing for about six months and once they saw that we passed that test, they were willing to work with us after that,” said Samuel Hall, founder of Patriots for America. “But it took a while. It definitely was an exhausting process.”

Though the militia members are well-armed, their mission is humanitarian and geared toward getting migrants to safety and away from human traffickers who often maraud the border looking for victims.

According to the group’s website, their mission is to defend families and communities from domestic terrorism, protect America and its borders, and rescue children and minors from sex trafficking.

“These are asylum seekers, these are families with small children. We’ve been pulling even babies out of the river. And I’m not talking about waist-deep rivers…they’re swimming with their baby and anything can happen. The current’s strong,” Hall said.

He added that he and his fellow militia members are trying to help save lives, provide medical care, and make sure they aren’t exploited by smugglers. They also work with CBP to get migrants processed. 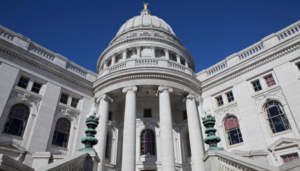