Famed linguist, philosopher, and political dissident Noam Chomsky has credited former President Donald Trump with being the “one Western statesman” advocating diplomacy between Russia and Ukraine.

The highly unexpected praise from Chomsky, 93, happened during an interview with Thijmen Sprakel.

“Well, there is fortunately one statesman in the United States and Europe who has laid out, a person of high political figure, who has made a very sensible statement about how you can solve the crisis. Namely, by facilitating negotiations instead of undermining them and moving toward establishing some kind of accommodation in Europe — in which there are no military alliances but just mutual accommodation.”

“He didn’t say it, but it’s something like what George H.W. Bush — the first Bush, not the second — proposed in the early 90s, when after the collapse of the Soviet Union, proposed what they called a partnership for peace, which would be open for Europeans generally or Asians as well,” Chomsky continued.

Chomsky said that it would not eliminate NATO, but deemphasize it so that other countries, including Russia, could join it and move towards a world with no military alliances.

“So going back to the one Western statesman — he didn’t mention all of this but he suggested something similar: move toward negotiations and diplomacy instead of escalating the war, try to see if you can bring about an accommodation which would be roughly along these lines,” Chomsky continued. “His name is Donald J. Trump.”

Noam Chomsky, in an interview this week, says “fortunately” there is “one Western statesman of stature” who is pushing for a diplomatic solution to the war in Ukraine rather than looking for ways to fuel and prolong it.

Chomsky said that he is not personally a fan of Trump, and in fact thinks that he is “the most dangerous person maybe in history,” but that he agrees with him on this issue.

“Let’s tell the truth: he’s the one person who’s said it and it’s the right way out,” he said. “Others have said it too but not in high positions.”

Chomsky is widely regarded as one of the most profound voices on the left when it comes to foreign policy.

In April the former president issued a statement warning of potential dire consequences if Russia and Ukraine fail to negotiate peace.

“It doesn’t make sense that Russia and Ukraine aren’t sitting down and working out some kind of an agreement,” Trump wrote, adding that a lack of negotiations means increased death.

Trump calls for a peace deal between Russia and Ukraine. pic.twitter.com/mu665BiE9e

“If they don’t do it soon, there will be nothing left but death, destruction, and carnage,” Trump continued. “This is a war that never should have happened, but it did.”

“The solution can never be as good as it would have been before the shooting started, but there is a solution, and it should be figured out now — not later — when everyone will be DEAD!” Trump concluded.

Russian President Vladimir Putin has said that they will cease fire “immediately” if Kiev meets their list of demands, including remaining neutral and ending their bid to join NATO.

In the book, the men introduced the concept of the propaganda model of communication, which is always relevant during times of war.

“A propaganda model has a certain initial plausibility on guided free-market assumptions that are not particularly controversial. In essence, the private media are major corporations selling a product (readers and audiences) to other businesses (advertisers),” the book explains. “The national media typically target and serve elite opinion, groups that, on the one hand, provide an optimal “profile” for advertising purposes, and, on the other, play a role in decision-making in the private and public spheres. The national media would be failing to meet their elite audience’s needs if they did not present a tolerably realistic portrayal of the world. But their “societal purpose” also requires that the media’s interpretation of the world reflect the interests and concerns of the sellers, the buyers, and the governmental and private institutions dominated by these groups.”

Chomsky and Herman go on to explain that, “in effect, the large bureaucracies of the powerful subsidize the mass media, and gain special access by their contribution to reducing the media’s costs of acquiring the raw materials of, and producing, news. The large entities that provide this subsidy become ‘routine’ news sources have privileged access to the gates. Non-routine sources must struggle for access, and may be ignored by the arbitrary decision of the gatekeepers. It should also be noted that in the case of the largesse of the Pentagon and the State Department’s Office of Public Diplomacy, the subsidy is at the taxpayers’ expense, so that, in effect, the citizenry pays to be propagandized in the interest of powerful groups such as military contractors and other sponsors of state terrorism.” 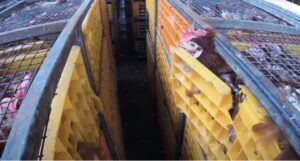 First Human Case of Bird Flu Strain Detected in US