A day after Speaker Nancy Pelosi’s visit to Taiwan, China’s military began a large-scale series of military drills that involved shooting missile barrages directly over the island nation and hitting targets as close to 12 miles from the nation’s coast.

The military drills, the largest ones China has conducted in such close proximity to Taiwan, involved the use of multiple ballistic missiles being launched at strategic points around Taiwan’s eastern coast. China’s military officials justified the drills as a test of their ability to “deny access” to their sovereign territory. Taiwan, however, called the drills “irrational” and said they undermined regional peace.

“China has chosen to overreact and use the Speaker’s visit as a pretext to increase provocative military activity in and around the Taiwan Strait,” National Security Council spokesman John Kirby said at a White House briefing earlier today. He also suggested that the White House expects China to continue its military activity in the future but did not elaborate. The total scale of the operation remains unclear, but China claims to have deployed as many as 10 destroyers and fired missiles hitting targets both on land and sea.

Jin Zong, a battalion commander who took part in the drills, told the People’s Liberation Army’s news service that the test were successful.

“As long as the commander gives an order, we will resolutely achieve it,” he said. Zong says he is determined to listen to the party and “defend the motherland with a high fighting spirit and accurate firepower.”

Meng Xiangqing, a professor at the National Defense University, said that the scope and intensity of these particular drills are expected to increase the “deterrent” role that all military drills play.

The PLA began a three-day exercise around Taiwan.#China #Taiwan pic.twitter.com/FyTJkPNSF1

Secretary of State Antony Blinken, who was in Cambodia today for a meeting with representatives from the ten members of the Association of Southeast Asian Nations, briefly spoke about the escalating situation in China during his opening remarks.

“The United States continues to have an abiding interest in peace and stability across the Taiwan Strait,” he said. According to Blinken the United States has remained consistent in its relationship with Taiwan and in respect to the “one China” policy that Beijing demands other countries adhere to. Blinken also said he hopes China will not take this opportunity to “manufacture a crisis or seek a pretext to increase its aggressive military activity.”

“We, and countries around the world, believe that escalation serves no one and could have unintended consequences that serve no one’s interests, including ASEAN members and including China,” Blinken said.

In China, Assistant Minister of Foreign Affairs Hua Chunying, who gave a press conference today, mocked an American journalist with Bloomberg who asked if China had considered that some might use these drills as evidence that China is a threat.

“This is a typical example of how certain people think in the West,” Hua said. According to the Assistant Minister, “China has done everything that is diplomatically possible” but because the issue is one concerning China’s sovereignty and provoked by the United States, China is not to blame.

#Pelosi’s stunt is another bankruptcy of US politics, diplomacy and credibility. It proves the US to be the biggest saboteur of peace and the biggest troublemaker to regional stability.

Instead, Beijing is projecting confidence in its decision to run the drills, which State Councilor Wangz Yi said was made only after “serious consideration and careful assessment.” 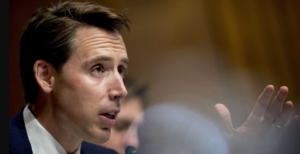 Josh Hawley Was the Only Senator to Oppose NATO Membership for Finland, Sweden