Chinese Foreign Ministry spokesman Zhao Lijian said the alliance between the United States, the United Kingdom, and Australia could be “severely damaging [to] regional peace [possibly] intensifying the arms race.”

Zhao said at a press briefing that Australia was now an “adversary” of China and recommended the nation “prepare for the worst.”

On Wednesday, the United States and the United Kingdom pledged to supply Australia with the technology to build nuclear-powered submarines.

“The new partnership, under the name Aukus, was announced in a joint virtual press conference between US President Joe Biden, UK Prime Minister Boris Johnson and his Australian counterpart Scott Morrison,” reports the BBC. “And while China was not mentioned directly, the three leaders referred repeatedly to regional security concerns which they said had ‘grown significantly.’”

From the East Room of the White House, President Joe Biden said, “This is about investing in our greatest source of strength, our alliances.”

“Today we’re taking another historic step to deepen and formalize cooperation among all three of our nations because we all recognize the imperative of ensuring peace and stability in the Indo-Pacific over the long term,” he said.

According to British Prime Minister Boris Johnson, the alliance will make the next generation of nuclear submarines for his country.

He told parliament, “Now that we have created AUKUS we expect to accelerate the development of other advanced defense systems including in cyber, artificial intelligence, quantum computing and undersea capabilities.”

Australian Prime Minister Scott Morrison confirmed that the announcement means his country would end a A$90 billion (US$66 billion) submarine deal with France.

“The decision we have made to not continue with the Attack Class submarine and to go down this path is not a change of mind, it’s a change of need,” he said. “We share a deep passion for our Pacific family and a deep commitment to them, and I look forward and I hope to see us continue once we move past what is obviously a very difficult and disappointing decision for France.”

Morrison is scheduled to meet with President Biden at the White House on September 24. The meeting is part of the “Quad” diplomatic group gathering, which includes leaders from Australia, India, Japan, and the United States.

“The U.S., Australia and the U.K. also plan to deepen technology sharing across emerging security arenas like cyber, artificial intelligence and quantum technologies. The three countries alongside Canada and New Zealand already share extensive intelligence through the Five Eyes alliance,” per CNBC.

China was never directly mentioned by either of the three national leaders during their joint statement.

Notably, Joe Biden seemed to forget Morrison’s name. Following Morrison’s and Johnson’s remarks, Biden opened his statement by saying “I want to thank that fella Down Under. … Thank you very much pal. Appreciate it, Mr. Prime Minister.” 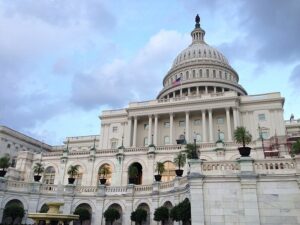