'The Reason Why We Want Historic Victory Is At The End Of The Day We Lead, We Delivered And We Had Your Back When You Needed Us'

DeSantis dismissed one reporter who asked the Florida Governor about the Civil War brewing within the Republican party following a lackluster performance in last week’s midterm election.

“We just finished this election, OK? People just need to chill out a little bit on some of this stuff,” DeSantis responded. “I mean, seriously, we just ran an election. We have this Georgia runoff coming, which is very important for republicans to win that Georgia runoff.”

"We just finished this election, ok? People just need to chill out a little bit on some of this stuff, I mean seriously […] We have this Georgia runoff coming, which is very important for Republicans to win." pic.twitter.com/XduafoZJif

I mean, I know around the country – Florida was kind of the biggest bright spot. It was not so bright in many other parts of the country. It was a substandard performance, given the dynamics that are at play. So hopefully we’ll be ableto do that. But I think what people like me who have been given the opportunity to continue is – OK, let’s do something with that. And the reason why we want historic victory is at the end of the day we lead, we delivered and we had your back when you needed us. That is why we won big.

Ahead of speculation surrounding Donald Trump’s third bid for the White House, the former President delivered a series of attacks against DeSantis, who is also speculated to be a Republican frontrunner in the 2024 election. On Truth Social, Trump referred to the Florida Governor as “average” with “great public relations.” Trump also noted he received more votes in Florida during the 2020 Presidential election than DeSantis received in Florida’s midterm election.

DeSantis brushed off Trump’s attacks during a press conference on Tuesday.

“Well, you know, one of the things I’ve learned in this job is when you’re doing, when you’re leading, when you’re getting things done, you take incoming fire, that’s just the nature of it,” said the Florida Governor. “I roll out of bed in the morning, I’ve got corporate media outlets that have a spasm, just the fact that I’m getting up in the morning, and it’s constantly attacking, and this is just what’s happened.”

“I don’t think any governor got attacked more particularly by corporate media than me over my four-year term,” DeSantis continued. “And yet, I think what you learn is all that’s just noise. And really what matters is: Are you leading? Are you getting in front of issues? Are you delivering results for people? And are you standing up for folks? And if you do that, then none of that stuff matters. And that’s what we’ve done.”

Last night, Trump officially announced his 2024 bid for the White House in a speech at Mar-a-Lago, Florida. Aides for the former President filed paperwork with the United States Federal Elections Commission (FEC) shortly before his speech began.

“My fellow citizens, America’s comeback starts right now,” Trump said before detailing his discrepancy with President Biden’s administration over the last two years. “In order to make America great and glorious again, I tonight am announcing my candidacy for president of the United States.” 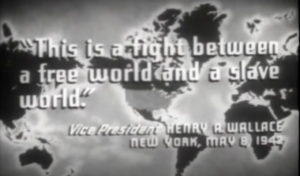 OPINION: Are we Headed Toward a “Tanaka Memorial” Curriculum?