Chicago Public Schools are closed on Wednesday after the teachers union voted to refuse to teach in person.

The Chicago Teachers Union’s 600 person House of Delegates approved a resolution for members to teach remotely until January 18 “unless an agreement with CPS is reached or the rate of Chicago COVID-19 cases falls below a certain threshold,” according to a report from the Chicago Tribune.

The delegates’ vote prompted the union to send virtual ballots to all of their 25,000 teachers, who supported their resolution. It also left parents unsure if their kids would be going to school the next day until after 11 p.m.

“In a message to parents late Tuesday, CPS officials apologized for the possible inconvenience. They said that if CTU approved its work action, students should not report to buildings Wednesday, though Martinez later clarified that students will not be turned away and will be looked after if dropped off. Schools will also be open for regularly scheduled COVID-19 testing, but there would be no remote instruction Wednesday, and after-school activities, sports and other school events would be canceled,” the Tribune reported.

CPS CEO Pedro Martinez said that the district will be coming up with a plan and filling parents in on Wednesday.

During a press conference about the vote, Chicago Mayor Lori Lightfoot said that teachers who do not show up for work on Wednesday would be placed on “no-pay” status.

“I have to tell you, it feels like ‘Groundhog Day,’ that we are here again,” Lightfoot said regarding repeated problems and issues with the union. “There is no basis in the data, the science, or common sense for us to shut an entire system down when we can surgically do this at a school level.”

Lightfoot also accused the union leaders of “politicizing the pandemic.”

Before the vote, WBEZ Chicago warned that “this action is triggering a showdown between the union and the school district, which could lock teachers out of their remote classrooms and prevent them from teaching. This would effectively shut down the school district.”

The union does not appear to be willing to back down.

“We are between a rock and a hard place — the rock being the pandemic, the hard place being an intractable, incompetent mayor,” Stacy Davis Gates, the union’s vice president, said this week, according to The New York Times. “We said a two-week pause so they could get themselves together, have the proper communication, put in the necessary mitigations.” 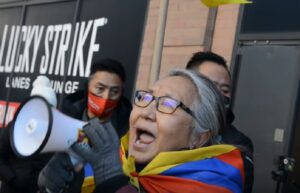