The violence comes days after police officers shunned Mayor Lori Lightfoot at a local hospital after a shootout during a routine traffic stop left one cop dead and another in critical condition.

More than two dozen Chicago police officers reportedly turned their backs when greeted by Mayor Lori Lightfoot late Saturday at the hospital where an officer remains in critical condition. https://t.co/lgCWjAUC30

The Mayor’s office released a statement following the shooting.

“The Mayor spoke to a range of officers that tragic night and sensed the overwhelming sentiment was about concern for their fallen colleagues,” the statement read. “As the Mayor stated yesterday, now is not the time for divisive and toxic rhetoric or reporting. This is a time for us to come together as a city. We have a common enemy and it is the conditions that breed the violence and the manifestations of violence, namely illegal guns, and gangs. The Mayor is focused on healing the wounds and will reject any and all that try to use this moment to drive further divisions in our city.” 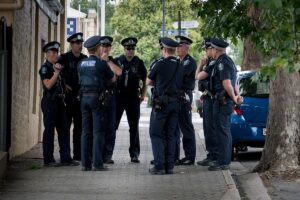