The CEO of Titanium Blockchain Infrastructure Services Inc. has pleaded guilty to a cryptocurrency fraud scheme that raised approximately $21 million from investors in the United States and overseas.

Michael Alan Stollery, 54, also known as Michael Stollaire, of Reseda, California, was accused of luring investors into buying a crypto coin from the company he founded through a series of false and misleading statements.

The Department of Justice said in a press release that “although he was required to do so, Stollery did not register the ICO regarding TBIS’s cryptocurrency investment offering with the U.S. Securities and Exchange Commission (SEC), nor did he have a valid exemption from the SEC’s registration requirements.”

“Stollery admitted that, to entice investors, he falsified aspects of TBIS’s white papers, which purportedly offered investors and prospective investors an explanation of the cryptocurrency investment offering, including the purpose and technology behind the offering, how the offering was different from other cryptocurrency opportunities, and the prospects for the offering’s profitability,” the DOJ said in their press release.

Stollery also posted fake client testimonials on the company’s website and claimed to have business relationships with the Federal Reserve and “dozens of prominent companies to create the false appearance of legitimacy.”

“Stollery further admitted that he did not use the invested money as promised but instead commingled the ICO investors’ funds with his personal funds, using at least a portion of the offering proceeds for expenses unrelated to TBIS, such as credit card payments and the payment of bills for Stollery’s Hawaii condominium,” according to the DOJ.

On July 22, Stollery pleaded guilty to one count of securities fraud. His sentencing is scheduled to begin on November 18.

Stollery was originally charged in May, 2018.

“This ICO was based on a social media marketing blitz that allegedly deceived investors with purely fictional claims of business prospects. Having filed multiple cases involving allegedly fraudulent ICOs, we again encourage investors to be especially cautious when considering these as investments,” Robert Cohen, the head of the SEC Enforcement Division’s Cyber Unit, said in a statement at that time.

If convicted, Stollery faces up to 20 years in prison. 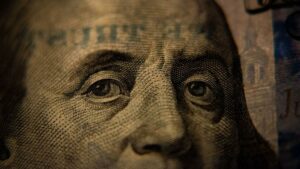 Both Democrats and Republicans Are Sending out 'Inflation Stimulus Checks'