'It is unclear how long the bacterium has been in the environment prior to 2020,' the CDC reported

The Centers for Disease Control has issued a warning about a bacteria outbreak detected in the soil of the Gulf Coast Region of Mississippi.

At least two people have been hospitalized after being exposed to the bacteria which has the potential to be deadly.

Burkholderia pseudomallei has never been detected in the continental United States before.

“It is unclear how long the bacterium has been in the environment prior to 2020 or how widespread the bacterium is in the continental United States; modeling suggests that the environmental conditions found in the Gulf Coast states are conducive to the growth of B. pseudomallei,” the CDC said in its July 28 health alert.

The agency noted it would need to conduct extensive ground sampling to determine the extent of the bacteria’s spread.

The two infected patients are unrelated but live in close proximity to one another. One was diagnosed with melioidosis in July of 2020 and the other was diagnosed in May of 2022. Both were initially hospitalized for sepsis due to pneumonia and recovered after being treated with antibiotics.

Their illnesses were linked after genomic sequencing data revealed they had both fallen ill from the same novel strain of the bacteria.

Both humans and animals can become sick if exposed to the bacteria through cuts or wounds, mucous membranes, inhalation, or ingestion. Person-to-person spread is not considered to be a serious risk.

“Among the average of 12 melioidosis cases reported to CDC each year, most have occurred in people with recent travel to a country where B. pseudomallei is known to be endemic,” the agency noted. “In the United States, a few cases of melioidosis may have been due to contact with contaminated commercial products imported from disease-endemic countries.”

In 2021, a four-case outbreak of the bacteria was linked to a contaminated aroma therapy spray.

The CDC notes that people with certain underlying chronic conditions, such as diabetes,  chronic lung disease, and chronic kidney disease, are more likely to become sick or die from the illness. Additionally, people with immunosuppressive conditions or who use alcohol excessively are at higher risk of becoming sick. The agency warns that early diagnosis and treatment is critical.

Melioidosis is endemic in Thailand and Northern Australia. Between 10-50% of cases internationally result in death.

If B. pseudomallei becomes established in the soil, it is extremely difficult to irradicate. 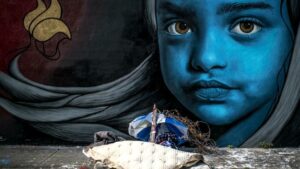