The image was put on display in March

A painting depicting George Floyd as a Jesus has sparked debate at Catholic University.

It was created by Kelly Latimore, a Chicago native who creates images of modern figures in the style of a traditional, religious icon. His work has been described by The Episcopal New Yorker as “transforming old notions about icon writing regarding what or whom should be represented.”

“Icon purists have not been pleased with Latimore’s iconographic choices, and many have denounced his work,” the outlet wrote. “Ironically, most of the threats have come from Eastern Orthodox individuals in Russia and Ukraine, according to Latimore.”

The Catholic University of America unveiled the painting in March as part of Black History Month. It is on display outside the law school’s chapel.

A posted description reads, “Following the violent death of George Floyd on May 25, 2020, Latimore created this icon in June of that year.”

“The image is evocative of the Pietà – the Mother of Sorrows,” it continues. “May Mary, the Mirror of Justice, hear the cry of all who have known the sorrow of losing a loved one to violence and injustice. Amen.”

“It is just another symptom of the liberalization and secularization of our campus." https://t.co/EkJtP229tw

Blayne Clegg, a junior at the university, told Fox News that the student body had a “universally negative” reaction to the painting.

“There’s a fine line between recognizing the innate dignity and righteousness of human beings that are made in the image of God and embracing brazen, progressive politics,” Clegg said.

Clegg added: “Jesus has been depicted as many different races, but Jesus is always depicted as nothing but Jesus.”

CUA Young Americans for Freedom, a student group, is petitioning to get the painting removed. As of Nov. 23, 1,000 people had signed in support of the removal. 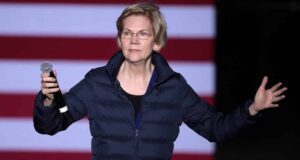