A dictionary publisher based in the United Kingdom has elected to change its definitions of “man” and “woman” to include more flexible interpretations of gender ideology.

Both definitions use “they” as a pronoun rather than “she” or “he.”

The dictionary included example phrases featuring what it deems a correct use of each word.

For “man,” the Cambridge Dictionary suggests “Steve can solve anything — the man’s a genius” or “Their doctor encouraged them to live as a man for a while before undergoing surgical transition.”

For “woman,” the publication offers “Women first got the vote in Britain in 1918” or “Mary is a woman who was assigned male at birth.”

It is unclear when Cambridge University Press, which began publishing the dictionary in 1995, made the revision.

“As of March 2022, the primary definition of ‘woman’ as ‘an adult female human being’ was all that was visible, according to archives. The page may have been updated last week, according to a Google search,” reports the National Review.

The expanded definitions are being widely denounced by conservative figures.

“F-ing traitors to the truth. Cambridge Dictionary is only the latest. If we don’t stop them from erasing women our civilization is [not going to make it],” wrote Mary Rooke of The Daily Caller.

“Oh wow, the @CambridgeWords dictionary definition of a woman is shocking, how did we get here?” tweeted British commentator Adam Brooks. “Surely women aren’t happy with this?”

The Cambridge dictionary is not the first to alter the definition of sex-related words to include a more modern take on gender.

In July, Merriam-Webster altered its definition of female to include “of, relating to, or being the sex that typically has the capacity to bear young or produce eggs,” “having a gender identity that is the opposite of male,” and “having a quality (such as small size or delicacy of sound) sometimes associated with the female sex.”

“Male” is defined as “of, relating to, or being the sex that typically has the capacity to produce relatively small, usually motile gametes which fertilize the eggs of a female,” “having a gender identity that is the opposite of female,” or “having a quality (such as vigor or boldness) sometimes associated with the male sex.”

Merriam-Webster recently announced its 2022 word of the year is “gaslighting” which it defines as the “psychological manipulation of a person usually over an extended period of time that causes the victim to question the validity of their own thoughts, perception of reality, or memories and typically leads to confusion, loss of confidence and self-esteem, uncertainty of one’s emotional or mental stability, and a dependency on the perpetrator.” 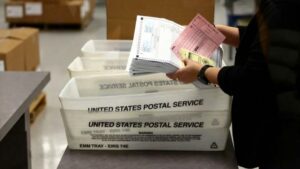