'The Current Sate Of California Has Become Governed By A Tyranny'

A Californian group named New California is advocating for secession from California as a 51st state citing “a tyrannical government.”

The group, which began efforts to split California as early as 2018, is an unincorporated association seeking to form a new state out of the existing state of Californa. New California seeks incorporation of rural areas for membership in the new state.

The borders of New California will not include California’s most densely populated regions like Los Angeles and San Francisco.

The group insists the aforementioned declarations, including California’s State Constitution of 1849, mandate the “right, the responsibility, [and] the duty of the people who are suffering the long train of abuses and usurpation at the hands of a tyrannical government to abolish and make new a government by the people and for the people under GOD.”

Today Bob Siegel interviews the founder of the @NewCaliState mvmt, Paul Preston, and OC Chair @LindaBe15921767, about the origins and success of this historic movement!

Head over CGM Radio to subscribe and listen: https://t.co/AlPHQR9f05 pic.twitter.com/78q8tpbnCZ

The group cites Article IV Section 3 of the United States Constitution declaring new states may be admitted by Congress into the Union, though “no new States shall be formed or erected within the Jurisdiction of any other State.”

Article IV Section 3 further declares a state may not be formed within the junction of two or more states without consent of the state Congress and legislature.

New California cites the precedence of state splitting with 1861’s creation of West Virginia as Virginia sought succession from the Union.

“Whenever any Form of Government becomes destructive of these ends, it is the Right of the People to alter or to abolish it, and to institute new Government, laying its foundation on such Principles and organizing its Powers in such form, as to them shall seem most likely to effect their Safety and Happiness,” reads the Declaration of Independence of 1776 cited by New California.

“New California will demonstrate a governance system as modeled by the U.S. Declaration of Independence, Constitution and Bill of Rights.”

In October 2022, the group filed a lawsuit with California’s Superior Court alleging they were “irreparably harmed by the use of a voting system that was not certified” after New California State President Chris Bush ran for office in Sacramento County, further arguing there was no confidence the system would use “accurately counted votes of the New California State Members.”

The group claims New California will be the 6th largest state behind New York, Illinois, and Pennsylvania. Old California would reportedly lose 25-27 seats in the House of Representatives, according to the group. 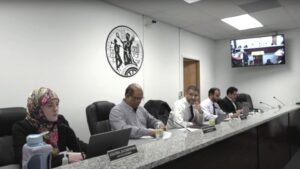