Assembly Bill No. 351  refers to composting humans as “natural organic reduction” and directs state officials to create a plan for implementing it by 2027.

“This bill, commencing January 1, 2027, would require the bureau to license and regulate reduction facilities, as defined, and would enact requirements applicable to reduction facilities substantially similar to those applicable to crematoria and hydrolysis facilities and would enact provisions relating to the disposition of reduced human remains by integration into the soil,” the bill states.

Those who compost a human without a valid registration will be guilty of a misdemeanor, according to the text of the bill.

A bill allowing for human composting has passed the New York House and Senate but has not yet been signed by Governor Kathy Hochul.

According to the summary of the New York bill, the legislation “provides for the creation, operation, and duties of natural organic reduction facilities as cemetery corporations for the contained, accelerated conversion of human remains to soil.”

The Hill reports that “the process works by placing the deceased in a special vessel and covering them with a mix of wood chips, alfalfa and straw allowing for a mix of microbes to break down the body.”

A Seattle funeral home that composts humans, Recompose, charges $7,000 and boasts that they can turn the deceased into soil in “as little as 30 days,” according to the report.

The funeral home’s website explains that they offer a “laying in” ceremony for when the body is placed in a vessel to compost.

“When you arrive at Recompose Seattle, you will be greeted by a member of our Services team who will guide you to the Gathering Space. Your person’s body will be in view when you walk into the Gathering Space, laying on a dark green bed we call a cradle, draped in a natural cloth,” the website explains.” The cradle will be stationed in front of our white, hexagonal threshold vessel, which is a passageway to our vessel system. A Recompose Services Specialist will guide you through the ceremony from start to finish.”

The company claims that “for every person who chooses Recompose over conventional burial or cremation, one metric ton of carbon dioxide is prevented from entering the atmosphere. In addition, our approach to human composting requires 1/8 the energy of conventional burial or cremation. Recompose allows you to choose an end-of-life option that strengthens the environment rather than depleting it.” 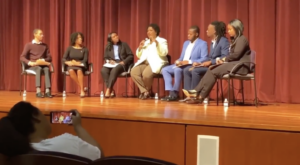 'No Such Thing As A Heartbeat At Six Weeks,' Stacy Abrams Declares