California Gov. Gavin Newsom has warned of a potential mandatory water restriction this summer if residents do not significantly scale back their usage.

Newsom met with leaders from the state’s largest urban water suppliers on Monday, “imploring them to take more aggressive actions to combat drought and better engage their customers to ensure all Californians are doing their part to save water,” according to a statement from his office.

According to the statement, Newsom “called upon local water agencies to submit water use data more frequently and increase transparency in order to more accurately measure whether California is meeting water conservation goals. In addition, the Governor called on local water agencies to increase education and outreach efforts to Californians on the urgency of the crisis.”

“Every water agency across the state needs to take more aggressive actions to communicate about the drought emergency and implement conservation measures,” said Newsom in the statement. “Californians made significant changes since the last drought but we have seen an uptick in water use, especially as we enter the summer months. We all have to be more thoughtful about how to make every drop count.”

Last summer, Newsom declared a drought emergency to pressure Californians to reduce their water usage by 15 percent. The state failed to reach their conservation goal by March, 2022.

In response, Newsom issued an Executive Order calling on local water agencies to escalate their response to the ongoing drought.

“Tomorrow, at the Governor’s direction, the State Water Resources Control Board will vote on a statewide ban on watering of non-functional turf in the commercial, industrial and institutional sectors as well as regulations requiring local agencies to implement water use restrictions amid the possibility that water supplies may be up to 20% lower due to extreme weather. Currently, local water agencies have implemented restrictions on about half of California’s population. If the Board’s regulations are approved, every urban area of California will be covered by a local plan to reduce water use,” Newsom’s office said.

Newsom’s office said that banning the watering of decorative lawns would save between 156,000 acre-feet and 260,000 acre-feet of water per year, the equivalent used by 780,000 households during the same time frame.

In addition, Newsom called on Californians to reduce their water usage by taking the following steps.

The state is calling on Californians to take immediate action to avoid a crisis, including:

Newsom will reconvene with the same agencies in the next two months so that they can provide an update on their progress. 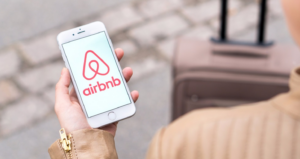 Airbnb to Close Domestic Business in China, According to New Report