A California elementary school principal has resigned and was charged with child abuse after being caught on camera shoving a 10-year-old special needs student to the ground.

Vollhardt has a specialized certification for handling students with autism.

In the footage, Vollhardt and two other staff members are seen speaking to the autistic student in the school’s cafeteria.

The child appears to be leaving with the two other staff members when he returns to speak to the former principal. At this point, Vollhardt violently shoves him and sends him flying. As the boy is on the ground, he appears to be still pointing and yelling at the child.

A principal in Fresno knocked down a special needs student. He quit the next day and is now vice principal in another school. pic.twitter.com/Y7mmtXL8s8

According to an arrest warrant affidavit obtained by the Daily Mail, Vollhardt claimed the boy was “getting in his face” and had pressed his fists against him — prompting the forceful shove.

The boy’s mother, Ann Frank, told ABC30 that she is angry that Vollhardt was quickly hired as a vice principal at the Tranquility High School after he resigned from Wolters.

According to the report, after the incident, Frank was called and told that her child had assaulted the principal and that she needed to come to get him.

It wasn’t until three months later that she was given the video footage and saw that the principal was the one who had assaulted the child.

“You cannot put force to these kids like that,” Frank told the local news outlet. “My son is autistic. Any parents seeing this video, they know what I’m feeling right now. My son was pushed with force by this principal who was supposed to protect him.”

“While there’s been zero information to lead us to believe this was a racially motivated altercation, we are not blind to the fact that racial dynamics are always present,” Nelson said. 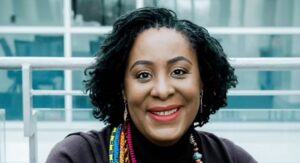