Due to its popularity, a California city council is gearing up to vote on labeling a Chick-fil-A location as a “public nuisance.”

The Santa Barbara location of the chain has been tremendously popular since it opened in 2013 — so much so that the long lines are now blocking the roadway.

The city council originally voted unanimously to declare the popular spot a public nuisance, but the Chick-fil-A franchise owner requested a delay to try and fix the issue by hiring more staff and a third-party traffic controller.

“State Street is one of the City’s most important streets for moving people and goods,” City Transportation Engineer Derrick Bailey told the Santa Barbara Press News. “It was never intended to operate with significant blockage.”

A city council agenda document obtained by Fox News claims that customers are ignoring efforts to prevent the drive-through lines from blocking traffic. In some cases, traffic has been blocked for over 90 minutes on weekdays and over 150 minutes on weekends.

The city document alleges that the long lines for the fast-food increase the risk of traffic accidents.

“Each time a queue forms on State Street, the eastbound number two traffic lane is blocked, leaving only one lane available. The queuing increases the risk of collisions, particularly rear-end collisions and side-swipe collisions,” the document continues.

“Chick-fil-A has a good problem here. They are so successful, they have outgrown their site. It’s possible they were oversized for that site, to begin with,” Santa Barbara City Council member Kristen Sneddon said of the restaurant, according to the report.

The city council will be voting on the matter again on June 7.

“On behalf of myself, Chick-fil-A and the many team members, we sincerely regret that this traffic situation has come to this point and heartily wish to work in good faith with the City to resolve this matter once and for all,” Santa Barbara Chick-fil-A owner-operator Travis Collins told the S.B. Press-News. 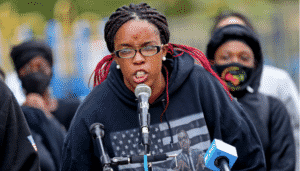