Candidate, a Green Beret, Says Death Threats and a Bullet Aren't Enough to Stop His Campaign

The FBI is investigating a shooting at the home of the parents of GOP congressional candidate Pat Harrigan, who is running against State Sen. Jeff Jackson (D) in North Carolina’s 14th congressional district.

The attack took place on Oct. 18 when someone fired a bullet into the residence, which entered through a glass window just a few feet from where the children were sleeping, according to Harrigan’s campaign.

After news of the story broke on Nov. 3, some reports online claimed the shooting took place at the candidate’s home. However, it has been confirmed the attack happened at his parents home while the children were visiting. Harrigan owns a separate nearby property.

“No one was injured, but the officers investigating did find evidence of a bullet casing which is being looked into,” Hickory Police Department spokeswoman Kristen Hart told The Carolina Journal.

Brett Jensen, a reporter for WBT News, says that the FBI is conducting ballistic tests as part of their investigation of the shooting. He also stated that other agencies may be involved in the investigation.

“My mission is a better economy, less inflation & safe streets,” he said. “A bullet & death threats aren’t enough to knock this Green Beret off that mission.”

“We fully support law enforcement as they investigate this incident and believe any wrongdoing should be prosecuted to the fullest extent of the law,” Campaign Spokesperson Tommy Cromie told WCCB-TV. “We at Team Jackson pulled our ad in an abundance of caution and concern, but to be clear, the home involved in the incident has never been featured in any of our advertising.”

This incident is the latest in a string of recent attacks against Republican candidates.

On Oct. 9, shots were fired outside the home of New York gubernatorial candidate Lee Zeldin, whose two 16-year-old daughters were inside at the time.

Zeldin held a press conference on Nov. 1 announcing the arrest of an 18-year-old who is one of the suspects involved in the attack.

On Nov. 2, Republican New Hampshire Senate candidate Don Bolduc was unharmed after an attacker attempted to punch him before he went onstage to debate Sen. Maggie Hassan (D).

“As the general said on stage tonight, it’s time to lower the temperature of the political discourse in this country. Prior to the debate, an individual in the crowd gathered outside attempted to punch the general and was quickly apprehended and arrested,” a Bolduc campaign manager told Boston 25 News. 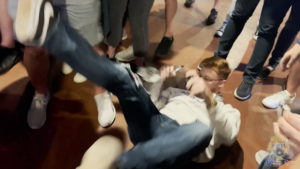