According to Fidelity Investment’s website, “two quarters of consecutive GDP contraction is the standard shorthand for a recession,” which does technically mean the U.S. economy has entered the beginning of a recession.

The National Bureau of Economic Research (NBER) defines a recession as a “significant decline in economic activity spread across the economy, lasting more than a few months, normally visible in production, employment, real income, and other indicators.” 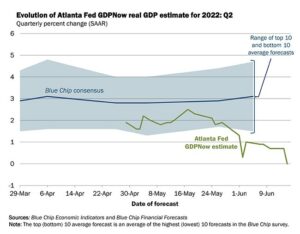 While there is no guarantee the trend will continue, based on the latest Fed data, the U.S. has at least entered a recession phase.

This is a breaking news story and will be updated accordingly as it develops. OPINION: Charlie Sheen’s 18-Year-Old Daughter Made an OnlyFans Against His Wishes – Yet He Does Nothing To Stop It