Among other measures, the bill would prohibit the sale of certain semiautomatic rifles to anyone under 21 years old

The United States House of Representatives is debating and this evening will hold a vote on H.R, 7910, sweeping gun control legislation that goes beyond simply raising the minimum age to purchase a firearm.

The bill, sponsored by Rep. Jerry Nadler (D-Ny), is titled the Protecting Our Kids Act, and is tied to nine other House resolutions aimed at curtailing gun access.

Passage of H.R. 7910 would prohibit the sale of certain semiautomatic rifles and shotguns to a person under the age of 21. Currently, the minimum age to own such weapons is 18. The law would apply to rifles that can accept magazines or feeding devices with more than five rounds.

The bill would exempt members of the Armed Forces who are on active duty, as well as full-time employees of the U.S. government, a state, or political subdivision of a State who, in the course of their official duties, is authorized to carry a firearm.

H.R. 7910 also seeks to regulate the storage of firearms within homes and imposes fines of $500 per violation and the possibility for forfeiture or seizure of a firearms for violations. The Attorney General would be responsible for determining appropriate methods for firearm storage and would regulate businesses, vehicles, private homes, off-site storage facilities, as well as “any other such place the Attorney General seems appropriate.”

It would also require firearm manufacturers that serialize more than 250 firearms per year provide a written notice with each manufactured or imported handgun, rifle, or shotgun that states ‘SAFE STORAGE SAVES LIVES’ followed by the address of the public website established by the Attorney General pursuant to section 403(a) of the Protecting Our Kids Act.”

The legislation also contains a provision codifying a ban on bump stocks and “any part or combination of parts that is designed and functions to eliminate the need for the operator of a semiautomatic weapon to make a separate movement for each individual function of the trigger,” meaning binary triggers would also be criminalized.

Under H.R. 7910 it would be illegal to import, sell, manufacture, transfer or possess any magazine that accepts more than 10 rounds of ammunition. Standard capacity for commonly used AR-15 style semiautomatic rifles is 30 rounds.

House representatives are expecting to vote on the bill this evening. 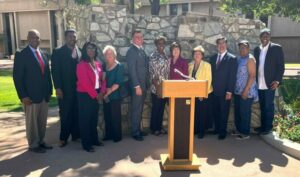