This is a breaking story and will be updated as more information becomes available.

The Supreme Court has voted to overturn 1973’s Roe v. Wade, handing abortion laws back to the states.

The 79 page opinion was written by Justice Samuel Alito.

Justice Alito wrote that the Roe court “usurped the power to address a question of profound moral and social importance that the Constitution unequivocally leaves for the people.”

“Roe was egregiously wrong from the start,” Justice Samuel Alito wrote. “Its reasoning was exceptionally weak, and the decision has had damaging consequences. And far from bringing about a national settlement of the abortion issue, Roe and Casey have enflamed debate and deepened division.”

“It is time to heed the Constitution and return the issue of abortion to the people’s elected representatives,” the ruling stated.

Justice Clarence Thomas wrote that it is time to reiterate his view that the due process clause also does not protect a right to an abortion.

In their dissent, liberal Justices Elena Kagan, Sonia Sotomayor, and Stephen Breyer wrote, “with sorrow—for this Court, but more, for the many millions of American women who have today lost a fundamental constitutional protection—we dissent.”

“Whatever the exact scope of the coming laws,” the dissenters continued, “one result of today’s decision is certain: the curtailment of women’s rights, and of their status as free and equal citizens.”

Chief Justice John Roberts did not join the majority. In a concurrent opinion he wrote that he would not have overturned Roe, instead only upholding Mississippi’s law banning abortions after 15 weeks.

In Dobbs v. Jackson Women’s Health Organization, the Supreme Court was hearing Mississippi’s appeal of a lower court ruling that found the state’s 2018 law banning abortion after 15 weeks of pregnancy was “unconstitutional.”

The law, HB 1510, the Gestational Age Act, banned abortion after 15 weeks except in cases of medical emergencies or severe fetal abnormalities. There were no exceptions for cases of rape or incest. The day Mississippi’s law went into effect, Jackson Women’s Health Organization, which provided abortions through 16 weeks, filed a lawsuit along with their one of their doctors, Sacheen Carr-Ellis.

The abortion provider won in lower courts and injunctions were issued to bar the law from being enforced based on the decision in 1992’s Planned Parenthood v. Casey

Casey struck down the trimester limitations from Roe and instead prohibited states from banning abortion prior to fetal viability, which is typically considered around 24 weeks into pregnancy.

Mississippi went on to appeal to the Supreme Court and ask them to overturn both Roe and Casey. Oral arguments in the case took place in December, 2021.

Part of Mississippi Attorney General Lynn Fitch’s argument centered around evidence that fetuses can feel and respond to pain at around 10–12 weeks gestational age. Due to this, she asked the Court to allow the prohibition of “inhumane procedures.”

Fitch also asked that the court revisit the viability standard, which she argued inadequately addresses the protection of potential human life.

A lawyer representing Jackson Women’s Health Organization maintained that the viability standard was correct and that the arguments being made by Mississippi were similar to the ones made by Pennsylvania in Casey. They said that since the arguments had not changed, the court’s ruling should not either.

On May 2, 2022, a draft opinion written by Justice Samuel Alito was leaked to Politico. In the opinion, he wrote that the Roe decision was “egregiously wrong from the start” and that “it is time to heed the Constitution and return the issue of abortion to the people’s elected representatives.”

According to the report, “the three Democratic-appointed justices – Stephen Breyer, Sonia Sotomayor and Elena Kagan – are working on one or more dissents,” it added that “how Chief Justice John Roberts will ultimately vote, and whether he will join an already written opinion or draft his own, is unclear.”

Anti-abortion pregnancy centers were targeted with vandalism and arson. The home addresses of conservative Supreme Court justices were posted online with successful calls for protests at their homes. An armed man was arrested outside Justice Brett Kavanaugh’s home after he confessed he flew from California to assassinate him over the leaked Dobbs decision and his unlikeliness to support gun control.

The day before the opinion was released, congress passed a bill to protect the family members of Supreme Court justices, similar to ways those in the legislative and executive branches are protected. 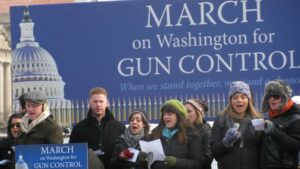