The United States House of Representatives is set to vote on the first gun control bill in 30 years after the Senate passed the legislation on June 23.

The bill passed 65-33 and the support of 15 Republicans made it a filibuster-proof majority.

House Speaker Nancy Pelosi (D-Calif.) applauded the Senate passing the gun control package and has promised a House vote before legislators leave for two-week recess over the July Fourth holiday.

“Every day, gun violence steals lives and scars communities — and this crisis demands urgent action. While we must do more, the Bipartisan Safer Communities Act is a step forward that will help protect our children and save lives,” she said in a statement. “First thing tomorrow morning, the Rules Committee will meet to advance this life-saving legislation to the Floor. When the Rules Committee finishes its business, we will head immediately to the Floor. And we will send the bill to President Biden for his signature, with gratitude for his leadership.”

The $13 billion bill will provide grants to states for “red flag” laws, block people with domestic violence convictions from owning a gun, and expand mental health investigations prior to issuance of a firearm. It will also make straw purchases of firearms a felony, expand background checks to include state juvenile records, and require that those who frequently buy and sell firearms license as gun dealers.

“The NRA will support legislation that improves school security, promotes mental health services, and helps reduce violent crime. However, we will oppose this gun control legislation because it falls short at every level,” the National Rifle Association (NRA) said in a statement. “It does little to truly address violent crime while opening the door to unnecessary burdens on the exercise of Second Amendment freedom by law-abiding gun owners.”

The NRA added, “This legislation can be abused to restrict lawful gun purchases, infringe upon the rights of law-abiding Americans, and use federal dollars to fund gun control measures being adopted by state and local politicians.”

President Biden has pledged to sign the legislation once it passes the House.

“I am glad to see Congress has moved significantly closer to finally doing something — passing bipartisan legislation that will help protect Americans,” he said in a statement. “Our kids in schools and our communities will be safer because of this legislation. I call on Congress to finish the job and get this bill to my desk.” 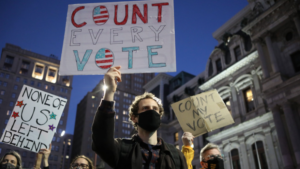 OPINION: 'Repeal the 19th'—The Spiciest Twitter Take, and Why It Shouldn't Be