'Remember This Is An Illegitimate Regime. Their Judgment Day Is On The 8th Of November When The Biden Administration Ends' Bannon told reporters

Former Trump White House chief strategist Steve Bannon was sentenced to four months in prison on Friday after failing to comply with a subpoena from congressional Jan. 6 committee.

The sentence will reportedly be stayed if Bannon and team file for appeal before Nov. 15.

Judge Carl Nichols said Bannon has “yet to demonstrate that he has any intention to comply with the subpoena,” appearing to agree with the Department of Justice (DOJ). However, Nichols agreed the criminal prosecution fell within Bannon’s favor because the committee had not immediately attempted to enforce it, Daily Mail reported.

Nichols countered Bannon’s executive privilege claim citing the former Trump advisor was a private citizen at the time of the riot on Jan. 6.

“Some of the information sought by the subpoena is information under which no conceivable claim of executive privilege could’ve been made,” said the judge of Bannon, who previously asserted his charges fell under the privilege. Nichols noted, however, Bannon appeared to be following legal advice and acknowledged he had in fact engaged with the Jan. 6 committee.

Steve Bannon gets 4 months in prison for contempt of Congress for defying January 6 subpoena https://t.co/RuQ5OxWovw pic.twitter.com/h3JqIp4039

“Executive privilege could not possibly permit the Defendant’s total noncompliance,” asserted United States Attorney Matthew Graves who previously recommended Bannon pay a $200,000 fine along with serving six months in prison due to bad faith, defiance, and contempt in a sentencing memo released Monday.

The Defendant was a private citizen who had not worked at the White House for years; the subpoena’s demands sought records and information wholly unrelated to the Defendant’s tenure there; and multiple categories of the subpoena were completely unrelated to communications with the former President. … From the time he was initially subpoenaed, [Bannon] has shown that his true reasons for total noncompliance have nothing to do with his purported respect for the Constitution, the rule of law, or executive privilege, and everything to do with his personal disdain for the members of Congress sitting on the Committee and their effort to investigate the attack on our country’s peaceful transfer of power. … His noncompliance has been complete and unremitting.

Bannon faced two counts of contempt of Congress — each of which carry a minimum of 30 days in prison along with a fine between $100-100,000.

“In my view the statute sets out a mandatory minimum of one month and a mandatory maximum of 12 months,” said Nichols.

“Remember this is an illegitimate regime,” Bannon told reporters before his sentencing. “Their judgment day is on the eighth of November when the Biden administration ends. … By the way, and remember: Take down the CCP.”

Bannon is the first political figure to be found guilty of contempt of Congress since Attorney General Richard Kleindienst and Watergate burglar G. Gordon Liddy were convicted in 1974, the outlet noted. 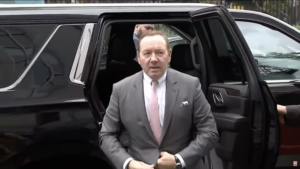