BREAKING: Shooting at Virginia High School, Suspect 'Not in Custody'

At least two teenagers were shot, but expected to survive

A high school in Newport News, Virginia, was evacuated Monday afternoon after a shooting was reported.

“Police are on the scene of a shooting at Heritage High School. Students are being evacuated and sent to the tennis courts,” Newport News Police Department said around 12:15 p.m. local time in a post online.

Heritage High School students were sent to the tennis courts where parents were advised to meet their children.

Around 1 p.m, police said the rumors that there were active shooters at other schools are false, per WAVY.

Another student with a broken arm had been transported to a hospital along with a student suffering from an asthma attack.

Chief Drew added that the FBI and state troopers were on the scene investigating the shooting. He said they were sweeping the building to make sure there was no one left inside.

Principal Dr. Earling Hunter thanked the police for their actions, including helping to reunite students with their parents, as well as his school’s faculty and staff.

Heritage High School is located approximately 30 miles northwest of Norfolk, Virginia. Students from grades 6 to 12 attend the school. Achievable Dream Academy, which is nearby, has gone into lockdown.

Local media outlets report that there is a major police presence in the area.

Michelle Price, with Newport News Public Schools, told the WAVY-TV earlier in the day that a “major incident” had occurred.

Closely monitoring the situation at Heritage High School in Newport News. Praying for the safety of all involved.

This is a developing story and the investigation remains ongoing. 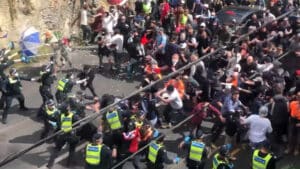