After six days of deliberation, the jury delivered a verdict of guilty in the sex trafficking trial of socialite Ghislaine Maxwell

On Wednesday, jurors in the case against Ghislaine Maxwell, the former British socialite accused of trafficking underaged girls with convicted pedophile Jeffrey Epstein, found Maxwell guilty on five of the six outstanding charges against her.

Those charges include the following:

The one charge in which she did not receive a guilty verdict concerned the victim identified as “Jane,” a charge based on enticing a minor for the purpose of sex.

Deliberations began on Dec. 20, 2021. At one point, it appeared the jury might be in a deadlock. The judge in the case pressed the jury to continue deliberations, even asking them to work longer hours in the face of the COVID Omicron surge.

Maxwell faced six counts, including two related to sex trafficking and four based on conspiracy to entice and transport minors for the purpose of sex. All counts are directly related to her partnership with Epstein.

Over three weeks, the jury heard from nearly 30 witnesses, including the four accusers who claim Epstein abused them. The four women testified that Maxwell helped identify them, recruit them and support the ongoing abuse.

Maxwell continues to deny the charges, arguing prosecutors are using her as a scapegoat for their failure to bring Epstein to trial before he killed himself in prison in August 2019.

Maxwell will now await sentencing from a Manhattan Judge, in which she will face multiple decades in federal prison. 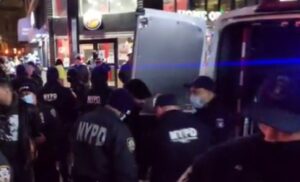