Five were arrested on Monday evening during a vaccine mandate protest at a Burger King in New York City.

The demonstrators had stormed the fast-food joint in downtown Brooklyn without masks and demanded that they be allowed to purchase meals.

Police were called to the location after the group refused to leave.

The New York Post reports that “Mitchell Bosch, 41, who was one of the five people taken into custody at Burger King, has already been arrested twice this month during protests at a Cheesecake Factory and Applebee’s.”

#BREAKING
Multiple protesters against mandates were just arrested at Burger King in Brooklyn NY for defying the mandate and charge with trespassing #NYC #NYPD pic.twitter.com/ooo1xKft18

According to independent photographer Leeroy Johnson, who filmed the incident, the protesters were charged with trespassing. The Post reports that they were all issued desk appearance tickets.

As the New York City Police Department officers were making arrests, people in the crowd could be heard shouting “shame on you!”

Mayor Bill de Blasio has implemented a “Key to the City” vaccine passport program for indoor dining, fitness, and entertainment. The mandate applies to everyone over the age five, and now requires two vaccine doses for New Yorkers over age 12.

“New York City will not give a single inch in the fight against COVID-19. Vaccination is the way out of this pandemic, and these are bold, first-in-the-nation measures to encourage New Yorkers to keep themselves and their communities safe,” said Mayor de Blasio in a statement earlier this month. “From workplace mandates, to $100 incentives, to mobile and at-home vaccination offerings, no place in the nation has done more to end the COVID era. And if you have not taken this step yet: there’s no better day than today to stand up for your city.” 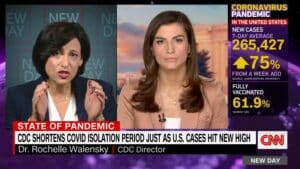