“We couldn’t meet at a more challenging time. We are confronted with so many crises simultaneously,” said Schwab, opening the WEF’s annual meeting in Davos, Switzerland. “What does it mean to master the future?”

“I think to have a platform where all stakeholders of global society are engaged,” Schwab continued, detailing governments, businesses, civil societies, and younger generation members connected to the WEF.

Creator of Dilbert comics Scott Adams shared video of Schwab, saying he was skeptical of “anything that can’t be explained in a sentence.”

“What exactly do they do? And why?” Adams asked.

“How is WEF/Davos even a thing? Are they trying to be the boss of Earth!?”

“Master the Future” doesn’t sound ominous at all … 🙄

How is WEF/Davos even a thing? Are they trying to be the boss of Earth!?

“I have a question. If these people at the WEF are so powerful and they think they’re the bosses of the earth, why don’t many people know about them?” asked one user. “And why do they seem to move in silence?”

“Why aren’t they all over my local media channels?”

Another user rebutted the skeptical user’s comment asking, “Is it possible that the WEF has already infiltrated & infested those media outlets and bought their silence?”

“Well except that you can read all about them and their projects on their website and what they say is in the news continually. Not very secret unless you close your eyes and cover your ears!” said another user, referencing the WEF’s public website.

Critics of the WEF suggest solutions proposed by the organization point towards collective globalism.

“But what is more important,” Schwab continued, “is that we approach the future with a positive spirit. With a spirit which reflects human creativity and ingenuity.”

The 2023 annual WEF meeting in Davos focuses on “Cooperation in a Fragmented World,” as the group stated their intention is to “reaffirm the value and imperative dialogues and public-private cooperation, not only to navigate the current cascading crises but, more importantly to drive tangible, system-positive change for the long term.”

WEF’s 2030 goals include “end poverty and hunger,” “protect the planet from degradation,” “ensure that all human beings can enjoy prosperous and fulfilling lives and that economic, social and technological progress occurs in harmony with nature,” and “to foster peaceful, just and inclusive societies that are free from fear and violence.” 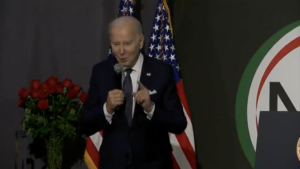