John Bolton has announced that he is seriously considering a White House bid in 2024 if no other Republicans present a challenge to former President Donald Trump.

Bolton was Trump’s national security adviser for part of the presidency.

“We’ve got perhaps a dozen or more potential presidential candidates looking to 2024. I think every one of them, before they declare their candidacy, should say, ‘Donald Trump was wrong. We repudiate him. He doesn’t belong in the Republican Party,’” Bolton said during an appearance on NBC’s “Meet the Press NOW.”

Bolton: “You can’t simply say, ‘I support the Constitution.’ You have to say, ‘I would oppose people who undercut it.’” pic.twitter.com/Twy8pluMYT

The hawkish neoconservative said that he is compelled to run in order to prevent Trump from returning to the presidency.

“And, honestly, if they don’t, there’s one thing that would get me to get into the presidential race, which I looked at in previous elections. It would be to make it clear to the people of this country that Donald Trump is unacceptable as the Republican nominee,” he added.

“If I don’t see that, I’m going to seriously consider getting in,” Bolton said.

Bolton has also been championing Florida Governor Ron DeSantis for the White House in 2024.

“[DeSantis has] had a very successful run as governor of Florida. He won re-election on Nov. 8 with a big majority. A lot of people look to him as the next generation candidate,” Bolton said in a recent interview with The Guardian. “That’s one of Trump’s biggest problems – his act is old and tired now.”

Bolton continued, “One question we asked was: do you want Trump or do you want a fresh face? I think in our last poll over 50% said they wanted a fresh face. That’s only going to continue. I personally don’t think Biden is going to end up running on the Democratic side and that’ll have an impact as well.”

Bolton was a member of the Project for the New American Century (PNAC), a group founded by Bill Kristol. The organization has been widely credited as being the architects of the Iraq War.

Bolton was fired by President Trump in his first term. The former president blamed Bolton for bad advice and said in January 2020, “If I listened to him, we would be in World War Six by now.” 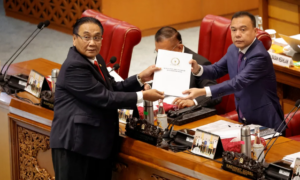 Indonesia Criminalizes Sex Outside of Marriage