Appearing on Fox News Monday night, Republican Texas Senator Ted Cruz said he had never seen so much damage done to the country in only two years.

Cruz, who is currently on a multi-state bus tour campaigning for Republican candidates in the November midterm election, criticized the Biden administration along with Democratic leaders for the increase of inflation, crime, and illegal immigration during an appearance on Fox News’ Hannity hosted by Sean Hannity.

“The top three issues in the country according to national polling are number one inflation, and especially gas prices, number two crime, and number three illegal immigration,” said Cruz. “And all three of them the Democrat far-left agenda of Biden, Harris, Pelosi, and Schumer is a train wreck. If you look at [it] people are hurting. Their lives are more difficult.”

Cruz discussed the difficulties young people face coming out of school with rising rent costs along with younger parents raising children and senior citizens living on fixed incomes. The Texas Senator noted people close to retirement have put off leaving the workforce, citing a decrease in their retirement’s value.

Hannity referenced recent poll results from the Associated Press-NORC Center for Public Affairs Research showing 46% of people viewing their personal financial situation poor, up from 37% in March. The Fox News host also mentioned a slowing in new home production along with rising interest rates for mortgages.

“Even worse if the Democrats — God forbid — were to get elected every one of these gets worse,” Cruz replied. “I have never seen in my life two years a government do this much damage to the country.”

In my life, I’ve never seen the government do this much damage to the country in just 2 years! pic.twitter.com/mHz5QWtYqw

I don’t think I thought it was possible that they would do this much damage and they’re engaged right now in blatant gaslighting. Joe Biden is tweeting out “if you elect the Republicans, inflation will go higher” — like what? You’ve got the White House Press Secretary saying “nobody’s crossing our southern border,” never mind the 4.4 million people that have crossed under Joe Biden. They’re just blatantly lying and the corporate media is corrupt and repeats their lies.

Earlier in the segment, Cruz gave his predictions for the upcoming November midterm elections, saying he believed Republicans would gain control of Congress in both the House and Senate.

“I think we’re gonna end up with a majority in the range of 30 to 50 seats, which is historic,” said Cruz. “It’s on the order of what we saw in 2010. I think that same sort of election is coming in November.”

Cruz further predicted Republicans could control anywhere from 51 to 57 seats in the Senate, which is currently split evenly between Republicans and Democrats with Vice President Kamala Harris being the tie-breaking vote. The Texas Senator noted his multi-state campaign tour saying, “You know who’s not doing that? Joe Biden. … cause none of the Democrats running want to be anywhere near him.”

“They’re running away desperately from the failed agenda of the radical left,” Cruz continued. “That really says something when the President of the United States is a millstone around the necks of these Democrat candidates but they’ve been rubber stamps for the radical left for two years and now they’re forced to face the voters.” 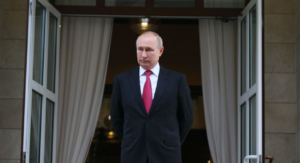