A Black Lives Matter rioter who was charged with attempted murder for shooting at police in Minneapolis has been acquitted on all counts.

Jaleel Stallings, 29, of St. Paul, claimed that he was acting in self defense when he fired three rounds at a police van with officers inside. He was charged with two counts of second-degree attempted murder, multiple counts of assault and other crimes.

Stallings had been hit with rubber bullets and claimed that he believed he was being attacked by civilians who were possibly “white supremacists.” Court documents stated that he put his gun on the ground and laid face down to surrender after he realized he had shot at police.

Luckily, no officers were injured by the gun fire.

The case made additional headlines and prompted widespread outrage on the right last year when an organization called the Minnesota Freedom Fund paid $75,000 in cash to get Stallings released on bail.

There has been outcry from the left as well, as body camera footage of the arrest, obtained by the Minnesota Reformer, showed Minneapolis SWAT officer Justin Stetson and Sgt. Andrew Bittell kicking and punching Stallings while he was on the ground. He also had injuries on his face in his booking photo.

After the footage was released, Minneapolis Police Chief Medaria Arradondo released a statement saying, “I’m aware of the recent decision by the honorable Judge Koch who as a part of his decision noted context is important and that the officers had just been through four days of rioting, looting, arson and the burning of the 3rd Precinct. Peaceful protest sometimes quickly escalated to violence. We respect the judicial process as well as the internal investigatory process which is currently active.”

Judge William Koch said that the officers had violated Stallings Fourth Amendment rights during his arrest.

“Officer Stetson and Sergeant Bittell allowed their anger and/or fear to overtake their faculties and they beat Mr. Stallings for nearly 30 seconds before attempting to place him in handcuffs,“ Koch wrote. “The video evidence does not support their testimony Mr. Stallings was resisting arrest in any way, instead he surrendered to their authority.”

The Associated Press reports that “the new attention on the case comes just months before Minneapolis voters will be asked to weigh in on a ballot question that would eliminate the police department and replace it with a new Department of Public Safety that would use a more comprehensive public health approach.” 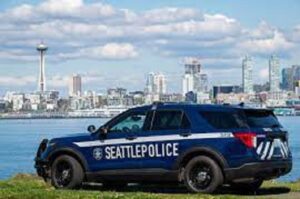