“The president’s been talking about the threat to our democracy since he launched his campaign way back in 2019 and again on January 6th and again in September in Philadelphia, Independence Hall,” said Klain.

I think the president decided a few days ago it was important to issue one final warning on this issue, to make it very clear to leave no doubt that we have people out there still peddling the big lie, people now raising the issue of election denial in this election, and of course the horrible incident involving Speaker Pelosi and her family, you know, showing the rising threat of political violence.

“And so I think all those things came together and led the president to make the strong remarks he made last night.”

Klain was further asked if Biden had met with Republican leaders Mitch McConnell and Kevin McCarthy to “unite” against political violence regarding to attack on Paul Pelosi last week.

“He hasn’t spoken to them recently,” the White House Chief of Staff responded. “The President’s remarks last night were very strong and bipartisan. [They] made it clear that the majority of Republicans, like the overwhelming majority of Democrats, oppose political violence.”

Klain clarified the President was referring to “MAGA Republicans” and “Q anon” supporters regarding political violence in his Wednesday speech.

On Nov. 2, Biden gave a speech at Union Station in Washington D.C. claiming “American democracy is under attack.” The President further suggested former President Donald Trump abused his power by putting “loyalty to himself before law under the constitution” in regards to his contest of the 2020 Presidential election results.

“I wish I could say the assault on our democracy ended that day. But I cannot,” said Biden in reference to the Capitol riot on Jan. 6, 2021. “As I stand here today, there are candidates running for every level of office in America: for governor, Congress, for attorney general, Secretary of State, who won’t commit … to accepting the results of the elections they’re running in. This is a path to chaos in America. It’s unprecedented. It’s unlawful. And, it is un-American. As I’ve said before, you can’t love your country only when you win.”

“We know that more and more ballots are cast in early voting or by mail in America,” said Biden during his speech, warning results may not be available on election night. “We know that many states don’t start counting those ballots till after the polls close on Nov. 8th. That means, in some cases, we won’t know the winner of the election for a few days after the election.” 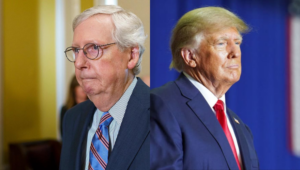 Trump Swipes At McConnell: 'He Should Be Impeached' If Debt Ceiling Is Eliminated With His Support