President Joe Biden told troops from the 82nd Airborne Division stationed in Rzeszów, Poland, that they would be going to Ukraine.

During his first State of Union address at the beginning of March, Biden promised that he would not be putting American boots on the ground in Ukraine.

“Let me be clear — our forces are not engaged and will not engage in the conflict with Russian forces in Ukraine,” Biden vowed.

However, Biden’s words in Poland imply that he has changed his mind.

US Secretary of Defense Lloyd Austin and other US officials were also present during the meeting.

“We’re in the midst of a fight between democracies and oligarchs,” he added.

Biden said that more democracies had been formed worldwide in recent years than have been lost.

“The rest of the world looks to us because, you know, we not only lead by the example of our power but by the power of our example. Your generation combines both,” he said.

Biden sat with the troops for pizza following his speech.

There are approximately 10,500 US troops stationed in Poland and roughly 100,000 across Europe.

Timcast has reached out to the White House for clarification about the meaning of his remarks. We will update this story if a response is provided. 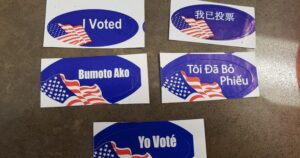