President Joe Biden expects Russia to invade Ukraine in the next few days, telling reporters that the risk is “very high.”

“My sense is this will happen in the next several days,” Biden said outside of the White House on Feb. 17

Citing the movement of Russian military forces near the Ukrainian border, Biden added, “We have reason to believe that they are engaged in a false flag operation to have an excuse to go in. Every indication we have is they’re prepared to go into Ukraine, attack Ukraine.”

The president says he does not plan to speak to Russian President Vladimir Putin although he noted he believes there is a “clear diplomatic path” to avoid conflict.

Biden’s comments come just before Secretary of State Antony Blinken is scheduled to report on the potential conflict in Ukraine to the United Nations Security Council (UNSC).

His comments also come “as government forces in Ukraine said that Kremlin-backed rebels in the Donbas fired on Ukrainian territory — hitting a school and injuring several people,” reports Business Insider. “The outlet also reports that “the pro-Russian rebels accused Ukrainian forces of firing on the territory held by the Moscow-backed separatists.”

Officials in Kyiv have denied these reports.

Other reports claim U.S. Deputy Ambassador to Russia Bart Gorman was expelled from the country, increasing tension between the U.S., Russia, and Ukraine.

“President Biden was clear that, if Russia undertakes a further invasion of Ukraine, the United States together with our Allies and partners will respond decisively and impose swift and severe costs on Russia,” the White House said in a statement following the call. “President Biden was clear with President Putin that while the United States remains prepared to engage in diplomacy, in full coordination with our Allies and partners, we are equally prepared for other scenarios.”

Former Congresswoman Tulsi Gabbard recently made an appearance on Tucker Carlson Tonight and said she believes the Biden administration wants Russia to invade neighboring Ukraine as an excuse to issue sanctions.

“First of all, President Biden could end this crisis and prevent a war with Russia by doing something very simple,” Gabbard said. “Guaranteeing that Ukraine will not become a member of NATO – because if Ukraine became a member of NATO, that would put U.S. and NATO troops right on the doorstep of Russia, which, as Putin has laid out, would undermine their national security interests.”

The federal government has already told Americans in Ukraine to leave the country. If they choose to stay, the Pentagon said they cannot expect a military evacuation in the event of an invasion. 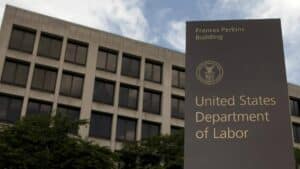 Jobless Claims on the Rise Unexpectedly