President Joe Biden warned that the threat of nuclear “Armageddon” is currently at the highest level since the 1962 Cuban missile crisis.

Biden told a crowd at a fundraiser for the Democratic Senatorial Campaign Committee that he knows Russian President Vladimir Putin well and that Moscow’s threats should be taken seriously.

“We have not faced the prospect of Armageddon since Kennedy and the Cuban missile crisis,” Biden said. “He’s not joking when he talks about potential use of tactical nuclear weapons or biological or chemical weapons because his military is, you might say, significantly underperforming.”

In a televised address to the nation, Putin recently said, “To those who allow themselves such statements regarding Russia, I want to remind you that our country also has various means of destruction, and for separate components and more modern than those of NATO countries and when the territorial integrity of our country is threatened, to protect Russia and our people, we will certainly use all the means at our disposal.”

He added: “It’s not a bluff,” according to The Guardian.

Forbes writes that Putin’s use of the term “territorial integrity” is significant because Russian military rules of engagement allow nuclear weapons to be used in a conventional conflict if that conflict “threatens the very existence of the State.”

According to an analysis in Forbes:

Such weapons would only be used in the case of an attack on Russia, and this week Russia has announced plans for “referendums” in occupied territories in Ukraine to officially make them Russian territory. So the implicit threat is that any Ukrainian attempt to regain more territory could be met with a nuclear response.

U.S. Defense officials have termed this an “escalate to de-escalate” strategy, meaning Moscow sees legitimacy in a limited first use of nuclear weapons to halt a large-scale conventional war.

Biden pushed back against Russia’s first use doctrine, warning that such a move could create wider nuclear conflict.

“I don’t think there is any such a thing as the ability to easily use a tactical nuclear weapon and not end up with Armageddon,” he said.

Shortly after Biden’s remarks, CNN host Don Lemon asked the network’s Chief White House Correspondent, Kaitlan Collins, if the White House had walked back Biden’s comments, given a recent string of incidents where he’s been said to have misspoken.

Collins said that the White House did not walk back Biden’s statement or add any additional comment to the record, suggesting that his remarks reflect the U.S. government’s official position. 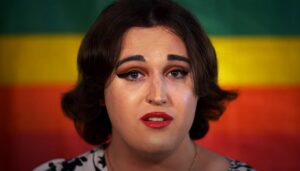 Iowa Reporter Comes Out as Transgender During Newscast (VIDEO)