President Biden ordered an additional 1,000 U.S. troops to Afghanistan on Monday, bringing the total number to 7,000, as he progressively directs more troops to the country to assist in the U.S. evacuation from Kabul as the situation becomes increasingly volatile.

BREAKING: President Biden orders another 1,000 paratroopers from the 82nd Airborne to Kabul. 7,000 U.S. troops will be on the ground in Afghanistan soon.

Biden originally ordered 3,000 troops to assist in the evacuation on last Thursday. That number increased to 5,000 by Friday, 6,000 over the weekend, and 7,000 on Monday. U.S. forces have had difficulty controlling the situation at the Karzai International Airport in Kabul, where the United States and other countries are evacuating citizens and Afghan refugees.

The United States took control of airport operations over the weekend after thousands of Afghans broke through security and flooded onto the tarmac.

Not a scene of Hollywood, it’s Just #Kabul air port, people want to run away, after the Capture of Kabul by the #Talibans #Afghanistan
By: @Mukhtarwafayee pic.twitter.com/ZLYieJm9mX

A video circulating on social media shows multiple Afghans clinging onto an American C-17 aircraft and then falling out of the sky after takeoff.

According to Fox News, at least 7 people have been killed at the airport Monday, including multiple gunmen who “fired into the crowd” of Afghans. 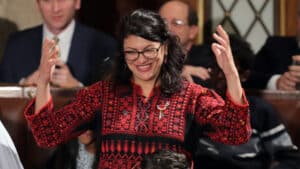 Rashida Tlaib Claims Taliban, Formed in 1994, Was Backed by U.S. in the 1980s — But She's Not Completely Wrong