President Joe Biden briefly discussed how he would feel running against former President Donald Trump in the 2024 election on Thursday.

The topic came up while Biden was speaking at a press conference in Brussels, Belgium, about the additional funds that the US will be sending in aid for Ukraine.

A reporter asked if NATO and the Biden administration were taking steps to make sure that what they do now will not be undone if the president loses the next election.

“The next election, I’d be very fortunate if I had that same man running against me,” Biden said.

Biden, who did not mention Trump by name in his response, said that he does not make foreign policy decisions based on elections.

“No election is worth my not doing exactly what I think is the right thing,” Biden said. “Not a joke. I’m too long in the tooth to fool with this any longer.”

The president added that the next presidential election is “a long way off” and that the focus right now is on the Democrats doing well in the midterm elections.

Trump has not technically announced his candidacy but said that he will be winning for a “third time” during his speech at this year’s Conservative Political Action Conference in February.

Trump has consistently implied that he is running, without explicitly confirming it.

“The socialists, globalists, Marxists, and communists who are attacking our civilization have no idea of the sleeping giant that they have awoken,” Trump said. “We are a sleeping giant.” 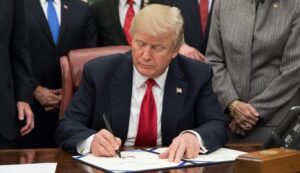