“On this difficult day, we mourn with the Parkland families whose lives were upended in an instant; who had to bury a piece of their soul deep in the earth,” the president said in a statement. “We pray too for those still grappling with wounds both visible and invisible. And, as we remember those lost in Parkland, we also stand with Americans in every corner of our country who have lost loved ones to gun violence or had their lives forever altered by a shooting, in tragedies that made headlines and in ones that did not.

“Out of the heartbreak of Parkland a new generation of Americans all across the country marched for our lives and towards a better, safer America for us all,” Biden continued. “Together, this extraordinary movement is making sure that the voices of victims and survivors and responsible gun owners are louder than the voices of gun manufacturers and the National Rifle Association.”

Gunman Nikolas Cruz pleaded guilty to 17 counts of first-degree murder and 17 counts of attempted murder after the attack. He is now 23. 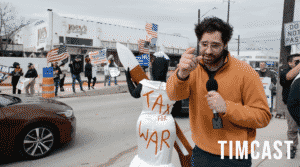 WATCH: AOC’s Supporters & Critics Protest Outside of Texas ‘Get Out the Vote’ Rally