The headquarters of the U.S. Bureau of Land Management (BLM) will be moved from Colorado to Washington DC, the Biden administration announced on Friday.

This reverses a move made under President Donald Trump in August of 2019. The previous administration said moving the agency’s headquarters to Colorado’s Western Slope would save taxpayers’ money. Democrats criticized the move, saying it was an attempt to weaken the agency and force longtime staffers to leave.

According to Business Insider, “Ryan Zinke, a former Montana congressman who was Trump’s first interior secretary, set the stage for the move to Colorado, emphasizing during his tenure that officials should be closer to the vast public lands that fall under the agency’s purview. The relocation was finalized under David Bernhardt, who succeeded Zinke in 2019.”

“There’s no doubt that the BLM should have a leadership presence in Washington, D.C. – like all the other land management agencies – to ensure that it has access to the policy-, budget-, and decision-making levers to best carry out its mission,” Interior Secretary Deb Haaland said in a statement. “In addition, the BLM’s robust presence in Colorado and across the West will continue to grow.”

Haaland said the past few years had been “disruptive” to BLM’s work, which includes managing over 245 million acres which largely fall in Western states. She added that only three BLM employees had moved to Colorado while 300 had retired or resigned following the move’s announcement in 2019.

While the bureau will maintain its offices in the Grand Junction location, the director and other senior leadership portions will serve in office in the nation’s capital.

“The bottom line is that more senior BLM officials and decision-makers moving to the Grand Junction office is a good thing for Colorado and our country,” Colorado Governor Jared Polis said in a statement Friday.

Democrat Senator Michael Bennet said, “While I am disappointed that the national headquarters will be in Washington, I believe establishing and growing a permanent BLM Western Headquarters in Grand Junction should be a very positive development.”

“While I’m disappointed with today’s decision and the details are light, this could still ultimately be a win for Grand Junction and the West as a western headquarters will remain in Grand Junction, more jobs will move to Grand Junction, and all the jobs that moved out West won’t be moved back to D.C.,” she said in her statement.

Republican Senator John Barrasso of Wyoming was similarly critical of the Biden administration’s announcement. Barrasso is the ranking member of the Senate Committee on Energy and Natural Resources. 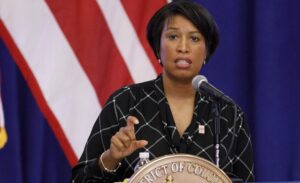