The Biden administration is reportedly pushing social media companies and SMS carriers to censor what they deem to be vaccine misinformation.

“Biden allied groups, including the Democratic National Committee, are also planning to engage fact-checkers more aggressively and work with SMS carriers to dispel misinformation about vaccines that is sent over social media and text messages,” Politico reported. “The goal is to ensure that people who may have difficulty getting a vaccination because of issues like transportation see those barriers lessened or removed entirely.”

Politico’s report comes after the Biden administration failed to meet its July 4th goal of 70% of adults receiving the COVID-19 vaccine.

White House spokesman Kevin Munoz said, “We are steadfastly committed to keeping politics out of the effort to get every American vaccinated so that we can save lives and help our economy further recover. When we see deliberate efforts to spread misinformation, we view that as an impediment to the country’s public health and will not shy away from calling that out.”

Politico cited criticism of the Biden administration’s door-to-door vaccination strategy as some of the misinformation that will be combatted. Politico wrote, “Over the past few weeks, criticism of the administration’s door-to-door vaccination strategy has increasingly become a fixture on Fox News, in addition to being a top topic on conservative social media posts and over SMS messages to cell phone users.”

White House Press Secretary Jen Psaki announced the door-to-door vaccination strategy last week, and was later surprised people were concerned about her description of “strike forces” going into communities to “get 12 to 18 year-olds vaccinated.”

“We’re continuing to press to reach it and we will in the next couple of weeks for adults over the age of 18,” Psaki said. “But our work doesn’t stop there and we are going to continue to press to get 12 to 18 year-olds vaccinated, to continue to work with communities where there’s lower vaccination rates. That’s one of the reasons we initiated these strike forces to go into communities and work with them to determine what they need. To take a localized, specific approach that works with elected officials in communities.” 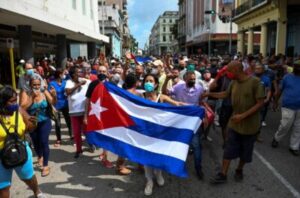