Better Red Than Dead: How Hollywood Rolled Out the ‘Red Carpet’ for Communist China

Once an ingenue eager to learn, China's film industry is now poised to take the starring role by dominating the global conversation when it comes to culture and entertainment

What happened to Richard Gere?

The virtual vanishing of his career — going from “one of the most sought-after leading men of his generation” to not heading a studio film in nearly 15 years — does not align with the descent of your average movie star. It does, however, inversely correspond with the profound impact of China’s global presence at the box office.

Aside from headlining hit movies like An Officer and a Gentleman and Pretty Woman, Gere made a name for himself in the 1990s by being Hollywood’s most noteworthy — perhaps only — outspoken critic against the Chinese Communist Party. The actor’s impromptu calling out of China’s “horrendous, horrendous human rights situation” at the 1993 Academy Awards, his advocacy on behalf of Tibet, and his friendship with the Dalai Lama made him anathema to the Chinese government. Then came 1997’s Red Corner, wherein Gere’s character gets ensnared in China’s primitive judicial system despite his innocence.

That same year, the success of James Cameron’s Titanic — around the world, in general, but in China, in particular — began to signify a shift in the economic reality of the movie industry.

In other words, “China’s box office got baked into Hollywood’s balance sheet,” Wall Street Journal reporter Erich Schwartzel writes in his new book, Red Carpet: Hollywood, China, and the Global Battle for Cultural Supremacy (Penguin Press, $28, 400 pgs., illustrated). By the time Cameron’s Avatar (2009) hit China, the blockbuster brought in over $200 million — four times the record-setting profit of Titanic. Such lucrative returns from a sizable market offered promising solutions to Hollywood’s “demand for higher grosses, the stagnation in the U.S., the new competition on TV, and the lost revenue from DVD sales. China to the rescue.”

That perceived solution papered over the bigger problem of complicit censorship and failed to anticipate China’s ultimate goal of replacing Hollywood as the leading exporter of cultural entertainment. 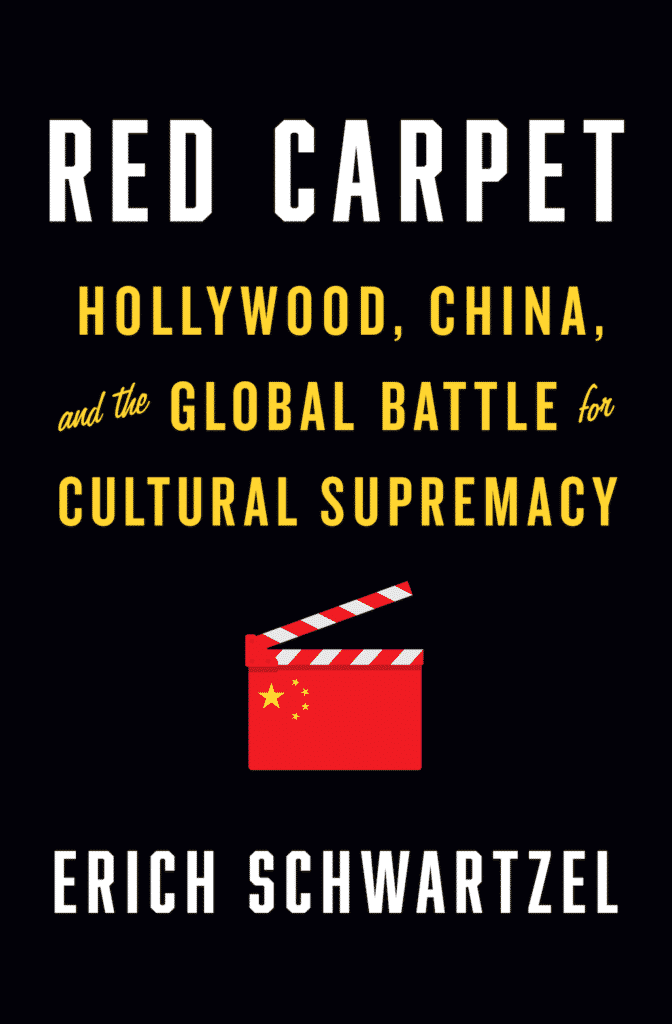 In retrospect, one could say, “First, they came from Richard Gere…” or Scorsese’s China-critical Kundun (1997) or the Brad Pitt-led Seven Years in Tibet (1997) — two films so offensive to the CCP that state officials convinced a programmer in Mumbai to strike them from their film festival schedule nearly a decade after their initial release. Now, plot lines of American movies are often restructured to appease Chinese officials, story elements involving gay characters are immediately snipped, and clothing elements like the Taiwanese flag are voluntarily removed from Tom Cruise’s iconic wardrobe in the next Top Gun installment:

“Chinese officials did not even have to weigh in. By 2019, Hollywood had so fully absorbed Beijing’s political preferences that such decisions were made by teams in Los Angeles without Chinese input. If it could help Paramount executives make their case to Chinese censors that Top Gun should show in Chinese theaters, Maverick’s bomber would adhere to the One China Policy.”

Schwartzel digs into the panorama of details involving China’s rise to dominance as a purveyor of blockbuster entertainment. Red Carpet is divided into three labyrinthine parts: the first shows how American movies gained influence in the China; the second details the collision where “Hollywood vulnerabilities met Chinese ambition”; and the third offers an overview of how the country hopes to utilize its geopolitical connections to become an authoritative cultural superpower.

Most people with a casual interest in the film industry are at least vaguely aware of the kowtowing status Hollywood holds with Beijing. Schwartzel’s book chronicles the specific points of interest in this story of “what happened between the two Top Guns … with implications that stretch far beyond the entertainment industry.” The assumption of China’s reliance on tentpole American movies is quickly becoming outmoded. Rather, as Red Carpet explains, the Chinese government used the American movie model as a learning opportunity to build their own movie industry by creating popular art that serves the state.

Thus far, their success is remarkable. The days of superhero movies and fast car franchises crushing the Chinese box office are gone. Out of the top 20 all-time highest grossing movies in China, only four are American and only one of those four (Avengers: Endgame) cracked the top ten. After years of studying “how the American film industry had achieved its status as the leader in global culture,” the Chinese government began to “re-create that achievement back home,” Schwartzel writes. Wolf Warrior 2 from 2017, a Chinese action sequel that “managed to wrap Xi’s propagandistic messaging in popcorn entertainment,” became the country’s highest grossing movie of all time — raking in more than the worldwide combined total generated by Thor: Ragnarok and Wonder Woman. And no wonder: in 2017, China boasted more movie screens than anywhere else in the world with over 50,000, compared to less than 40,000 in the U.S. 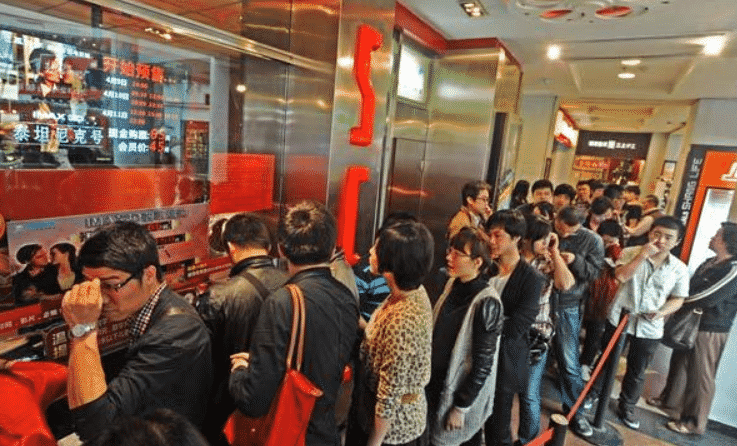 While it’s tempting to accuse China of pillaging Hollywood’s success secrets, Red Carpet reviews the extent to which studio executives and industry leaders were willing to jump through whatever hoops presented to them in order to lock in a comfortable relationship with the CCP. In an apt and chilling comparison, Schwartzel points out how movie studios had once complied with censorship requests from Nazi Germany, whose

“approach to regulating film … bears alarming resemblance to the one China would adopt half a century later. … Much like China today, Germany had built a system of economic punishment for political crimes, one that combined vocal outcry, retaliatory tactics, and the preemptive obedience of Hollywood executives to keep certain stories offscreen. That is, any narrative that challenged their version of history, their national sovereignty, or their strength.”

Just as studio executives justified their compliance with the Nazis — it’s “no more onerous than the edicts handed down by the Chicago Board of Censors,” one scholar noted — decision makers in the industry today make the same preemptive, nervous concessions. That’s why the 2012 Red Dawn remake absurdly and hastily changed what was scripted as a Chinese invasion into an North Korea invasion in post-production — prompting one character in the film to remark, “It doesn’t make any sense.”

The outrages and hypocrisies are numerous, albeit somewhat unsurprising. It’s not exactly breaking news that China has a stranglehold on the United States in everything from manufacturing to the NBA. But Red Carpet is the first instance I’m aware of that gathers all the critical details of China’s interaction with Hollywood into one comprehensive book. Schwartzel, who combines firsthand reporting with thorough research, uses the available information to generate a captivating evaluation that casts China as “the savvy ingenue” who started the 21st century “eager to learn” but now “grasps for the leading role.”

Schwartzel won’t say how this “final act in a classic tale” will conclude, but the fifty percent drop in U.S. box office sales compared to pre-pandemic times gives some indication. At any rate, in 2022, what segment of a young demographic cares about the moviegoing experience as much as the endless stream of enticing TikTok videos available at any given moment? The app, owned by Chinese company ByteDance, has been downloaded over 2.6 billion times. By comparison, Spiderman: No Way Home — last year’s runaway smash hit — pulled in a little over 9 million moviegoers. Such a trend might indicate the foresight of China’s ability to wrestle the cultural conversation from Hollywood.

As for Richard Gere, the cost of calling out the pettiness and lies of authoritarian China has gained a kind of permanence. Just a few years ago, Gere was slated to appear in an independent movie helmed by a Chinese director. But two weeks before shooting, the director phoned the actor on a secure line to say, “I can’t do it.”

Schwartzel reports: “If he made a movie with Gere, the director and his family would never be permitted to leave China again. The director’s own career would dry up, he said, as if Gere’s situation were contagious.” Or, as one studio executive put it, “If you could have somebody else” — Michael Douglas, Gary Oldman, Jeremy Irons, even Mel Gibson — “then get somebody else.”

This isn’t meant to serve as a lament for Richard Gere — no doubt he’ll be fine. But his story is one of many that should serve as an forbidding warning about the dangers of sharing a bed with an authoritarian regime determined to remake reality into a new propagandistic image. The same China that shut down the career of a movie star has only gained in strength as the purveyors of former cultural icons continue to acquiesce in weakness.