Kanye West’s private school will not be allowed to compete in one of the nation’s premier high school basketball tournaments, according to a statement from the organization.

Scholastic Play By Play Classics, an organization that hosts tournaments for top-ranking high school basketball teams, has announced that it has severed ties with Kanye West’s Donda Academy and that the school’s basketball team would not be allowed to participate in future tournaments.

“In light of recent anti-semitic statements by Kanye West, we will no longer be hosting Donda Academy at this year’s Play-By-Play Classics events, including the Kentucky Play-By-Play Classic,” the statement reads. “Kanye’s words and actions violate our values as a company and a country, and what we seek to ensure at all our events — a spirit of diversity, sportsmanship, inclusion, equity, and mutual respect.”

According to SPBPC founder Jeremy Treatman, Donda Academy head coach Dorell Wright told him that he understood the tournament’s decision to cancel the team’s appearances.

But not all hope is lost for the team — the City of Palms Classics, an unrelated tournament held in Florida, has opted to keep Donda in its tournament brackets, according to the Los Angeles Times who spoke with the tournaments executive director, John Naylor.

“Obviously, the uproar hasn’t sat well with anybody, but at the end of the day, these are really good kids,” Naylor said. “We aren’t asking Kanye West to be on the floor, we are asking the kids to be on the floor. We invited the team, not Kanye.”

For the past 18 years, SPBPC has hosted basketball games at venues throughout the country, and scores of participating players have been drafted into professional leagues.

The organization noted that the student-athletes were innocent and uninvolved, but said they would regrettably still be deprived of a chance to play. “While we are firm in our reasoning for this decision, it does not diminish our heartache for Donda’s hardworking student-athletes who will lose out the most,” the statement said.

“Unfortunately, we cannot in good conscience host an organization founded and directed by Mr. West at our events.”

Donda Academy, which is currently unaccredited, is a private school in southern California that serves 100 students from Kindergarten through twelfth grade.

Since Ye’s comments about the Jewish people earlier this year, his business empire has received a hefty share of backlash. Adidas, which partnered with the billionaire rapper almost a decade ago, has ended its relationship and will no longer produce his Yeezy footwear line. Balenciaga, the luxury fashion brand which supplied uniforms to the Donda Academy basketball team, has also severed ties. 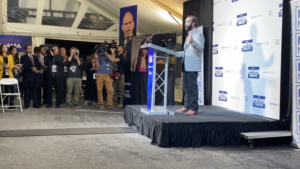