Americans are now paying more in rental costs than ever before, as the median monthly cost for rent surpassed $2,000 for the first time in May, according to a new report from Redfin.

Rent prices for apartments are up 15 percent from May 2021.

“More people are opting to live alone, and rising mortgage-interest rates are forcing would-be homebuyers to keep renting,” said Redfin deputy chief economist Taylor Marr. “These are among the demand-side pressures keeping rents sky-high. While renting has become more expensive, it is now more attractive than buying for many Americans this year as mortgage payments have surpassed rents on many homes. Although we expect rent-price growth to continue to slow in the coming months, it will likely remain high, causing ongoing affordability issues for renters.”

Mortgage rates play a large role in what price a home buyer will pay for a home. A rate increase from just 4.5 percent to 5 percent would mean a homebuyer pays more than an extra $1,000 per year and more than $32,500 over the life of a standard 30-year loan. 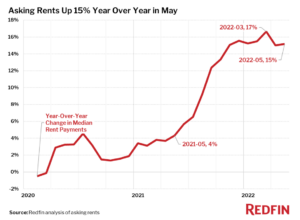 Nationwide rental prices are increasing four times faster than income, according to a separate report from RealEstateWitch.com.

The Top 10 cities with the fastest rising year-over-year rents are:

The city with the lowest median rent price is Kansas City, MO, with an average of $1,428 per month.

“It’s been a tremendous increase in rent,” Cecille McCarty, who lives in Birmingham, Alabama, told WBRC News, a local Fox affiliate. “Not just things that you want, but things that you need you kind of have to nick off of it well. I’m going to have to do that later or you have to kind of budget your money a little bit more.”

The only three of the top 50 most populated metro areas that saw rents decline over the last year were Milwaukee (-10 percent), Kansas City (-3 percent), and Minneapolis (-3 percent). 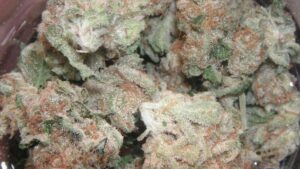