He is confined to the country for 8,000 years or until the payment is made

An Australian man has been banned from leaving Israel for 8,000 years because he owes child support.

The stay-of-exit order was issued against Noam Huppert in 2013. It will not be lifted until he pays the equivalent of over $3 million in future child support payments.

The 44-year-old works as an analytical chemist for a pharmaceutical company. He moved to Israel in 2013 after his ex-wife moved there with their two children, who were three months old and five years old at the time.

The children’s mother subsequently brought a custody case to an Israeli court.

An Israeli court ruling banned him from leaving the country — even for work or vacation. Huppert must pay $5,000 Israeli sheckeles per month. While it is presently unclear if the amounts are for both children or for each child, the payments will continue until the children are 18.

Huppert describes himself as one of many Australian men who are “persecuted by the Israeli justice system only because they were married to Israeli women.”

Under Israeli family law, “men are expected to pay 100 per cent or more of their income to pay for their kids — and they face prison for up to 21 days every time they are unable to come up with the monthly payments,” per The Irish Sun.

British journalist Marianne Azizi, who covers the stay-of-exit clause, told the outlet that it was “almost impossible to ascertain” how many other men were subject to the travel restriction.

“This is a highly guarded secret. If other foreign nationals are similar, I could guess hundreds (of Australians) are there,” she said.

The U.S. State Department has noted that civil and religious courts “actively exercise their authority to bar certain individuals, including nonresidents, from leaving the country until debts or other legal claims against them are resolved.”

“Israel’s religious courts exercise jurisdiction over all citizens and residents of Israel in cases of marriage, divorce, child custody, and child support,” the note says. “US citizens, including those without Israeli citizenship, should be aware that they may be subject to involuntary and prolonged stays (and even imprisonment) in Israel if a case is filed against them in a religious court, even if their marriage took place in the United States, and regardless of whether their spouse is present in Israel.”

Australia’s Department of Foreign Affairs and Trade does not appear to offer a similar warning to its travelers.

If he does not pay the owed child support, Huppert would not be eligible to leave Israel until Dec. 31, 9999. 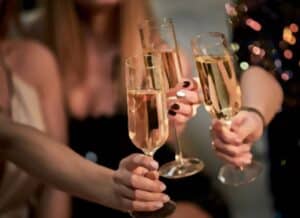 Airbnb Vows to Crack Down on New Year's Eve Parties