California man was in possession of a gun and burglary tools

The man, 26-year-old Nicholas John Roske of Simi Valley, California, was carrying a firearm, according to Fox News. He also had burglary tools, sources told The Washington Post.

The federal affidavit filed against the would-be assailant states Roske was in possession of pepper spray, zip ties, a hammer, a crowbar, duct tape, and a tactical knife in addition to a Glock 17 pistol with two magazines and ammunition.

NEW: Here’s the federal affidavit against the man accused of trying to kill Justice Brett Kavanaugh.

Police received a tip that the man may have tried to harm Justice Kavanaugh.

Sources for the Post claimed the man was angered over a leaked draft of a February Supreme Court opinion that could possibly signal the overturning of Roe v. Wade.

They indicated he was also upset about the recent spate of mass shootings.

Tensions have been rising since the leak of the draft opinion, and protestors have gathered outside the homes of justices in response to the potential overturning of the landmark ruling permitting abortion rights nationwide.

This is not Justice Kavanaugh’s first run-in with angry activists.

Dozens of left-wing protesters gathered in front of his home in late 2021 in response to his decision rejecting a challenge to a Texas abortion law. Prior to the Senate vote on his confirmation in 2018, an angry mob of protestors assembled outside of the Supreme Court.

After the leaked draft opinion sparked national outrage, the U.S. Senate passed a bill expanding security for family members of Supreme Court justices. The U.S. Marshal Service now provides around-the-clock-security at the homes of all justices.

Editor’s Note: This story has been updated with the suspect’s name, age, and place of residence. 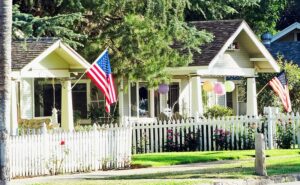 OPINION: It's Time to Discard the Boomer American Dream