An armed teenager was arrested after he and another person drove through a security checkpoint at a Joint Base Andrews’ main gate.

The March 6 incident prompted the base to go into lockdown sometime after 9:30 P.M. Officials for the base said the individuals “failed to adhere to commands” issued by security personnel.

Vice President Kamala Harris and four members of President Joe Biden’s cabinet had arrived at the base less than 15 minutes earlier. The group had attended an event in Selma, Alabama, commemorating the 57th anniversary of the 1965 civil rights march known as “Bloody Sunday.”

Harris and the cabinet members had already departed the base at the time of the 9 P.M. incident, according to a tweet from a reporter who was part of the press pool traveling with the vice president.

President Joe Biden was not on the plane that landed at the base. Biden, instead, returned to the White House that night from Delaware via helicopter.

The 17-year-old has been arrested and is in custody, according to a press release issued by the base on March 7. The other person fled the scene.

There are no reports of casualties or injuries and no shots were fired.

With aid from local authorities, the 316th Security Forces Group conducted a full sweep of the installation and reported finding evidence that the second individual was no longer on the base.

“I am incredibly proud of the quick actions of our Defenders to immediately deploy the barriers to stop last night’s stolen vehicle and then apprehend one of the individuals that had a weapon,” said Colonel Tyler Schaff, the installation commander of the 316th Wing and Joint Base Andrews. “The Defenders handled the intense situation with discipline and calm professionalism. We are also thankful for our partnerships with local authorities, who responded rapidly on base to assist the 316th Security Forces Group throughout the night.”

Schaff thanked those impacted by the lockdown for their understanding and patience.

According to Stars and Stripes, “the incident comes just more than a year after another high-profile intrusion at the key air base. A homeless man with a lengthy arrest record was able to drive onto the post Feb. 4, 2021, after he was permitted entry by a ‘distracted gate guard,’ an Air Force Inspector General probe found last year.”

Before he was captured, the man entered an Air Force C-40 Clipper jet. The intrusion prompted the Air Force to hold a service-wide review of the base’s security procedure but ultimately concluded there were no systemic issues at the installation.

The main gate at the base reopened to full capacity at approximately 3 A.M. An investigation of the security breach is ongoing. 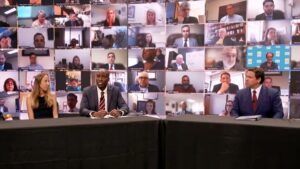 Florida Department of Health to Recommend Healthy Children Should Not Get COVID Vaccines, Contradicting CDC