An Arkansas man has been arrested for allegedly murdering his girlfriend, wrapping her body in a comforter, and leaving her in an abandoned driveway.

Making the case even stranger, the alleged killer moved in with a woman who has a “marked resemblance” to his victim and the pair were planning to get married — despite knowing each other for only three days.

Maurice Anthony Richardson, 60, of Fort Smith, was charged on Wednesday with first degree murder in connection to the death of Tonia Tram Tran, 53, according to a press release from the Arkansas Department of Public Safety.

Tran’s body was found on August 10th in an abandoned driveway south of Interstate 40 along Arkansas Highway 186.

According to a report from the Arkansas Democrat Gazette, law enforcement officers had found a bloody mattress at Richardson’s home.

Police also found blood in Tran’s car, which was left at the duplex where Richardson was living with his new lookalike fiancée. Investigators said that the pattern of the blood was consistent with someone being dragged out of the vehicle.

Sebastian County Prosecuting Attorney Daniel Shue told the Times Record that the coroner found she had died by suffocation, but had also been sexually assaulted and beaten.

The comforter that Tran’s body was wrapped in had a hummingbird print, which also matched other bedding found at Richardson’s residence. He had recently purchased a new mattress.

At the duplex, law enforcement officers found Tran’s citizenship paperwork. She had reportedly just moved to Arkansas from California two months ago.

Sgt. Chris Waters of the Arkansas State Police told the newspaper that Richardson’s new fiancée “bears a marked resemblance to the victim” and told officers that they had only known each other for three days. Her name has not been made public at time of publishing.

While searching the home, police found an empty wedding ring box and the lookalike was wearing an engagement ring.

Richardson has previously been convicted of four felonies, including possession of a firearm and two counts of promoting prostitution.

The accused murderer is scheduled to be arraigned next Wednesday. Richardson is currently being held at the Sebastian County Jail and his bail is set at $500,000. 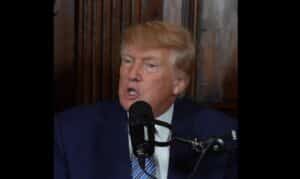