An Arkansas bill seeks to formally classify drag performances as “adult-oriented business” and ban children from attending them.

The legislation, Senate Bill 43, would also place limitations on where the shows could take place.

The bill adds the controversial shows to the description of “adult-oriented business,” which also lists “an adult arcade, an adult bookstore or video store, an adult cabaret, an adult live entertainment establishment, an adult motion picture theater, an adult theater, a massage establishment that offers adult services, an escort agency, or a nude model studio.”

Sponsored by Arkansas Sen. Gary Stubblefield and Rep. Mary Bentley, the legislation also describes drag performances as when one or more performers “exhibits a gender identity that is different from the performer’s gender assigned at birth using clothing, makeup, or other accessories that are traditionally worn by members of and are meant to exaggerate the gender identity of the performer’s opposite sex.”

The bill further defines a drag show as when a performer “sings, lip-synchs, dances, or otherwise performs before an audience of at least two (2) persons for entertainment, whether performed for payment or not” and is “intended to appeal to the prurient interest.”

“It’s prohibiting any drag queen performance in front of where minors are present,” Bentley told the station.

Megan Tullock, director of programs and advocacy for NWA Equality, told the station that the legislation could impact venues from outdoor theaters to Pride parades and argued that it would violate free speech.

“Even having nothing to do with the youth zone that does include drag performance, our main stage, which is outside, has drag performers on it and that would not be possible because it’s an outdoor space that kids have access to,” Tullock said.

After being introduced on Monday, the bill will now head to the City, County & Local Affairs Committee. It is likely to pass due to the prominent majority Republicans hold in the State House and Senate. 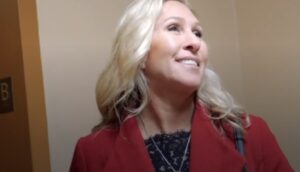