The comes following a 20-minute conversation between Victor and Masters recorded on Monday, according to the New York Times.

“At my invitation, Blake Masters and I had an unscripted, open, and recorded discussion and exchange of ideas on a variety of issues — we discussed the economy, taxation, foreign policy, existential threats, education, the Federal Reserve, energy policy, guns, immigration, abortion, the drug war, separation of church and state, same-sex marriage, and euthanasia,” said Victor of his conversation with Masters.

“I found Blake to be generally supportive of the Live and Let Live Global Peace Movement,” Victor continued of his Republican opponent. “After that discussion, I believe it is in the best interests of freedom and peace to withdraw my candidacy and enthusiastically support Blake Masters for United States Senate. I intend to assist in any way reasonably possible to elect Blake.”

NEWS: The Libertarian candidate in the Arizona Senate race is dropping out and endorsing Blake Masters with one week left.

Masters had courted Marc Victor, including agreeing to a recorded conversation on Monday.

Could boost Masters in a close race.https://t.co/gTOWmrHGky

The Libertarian candidate was expected to play spoiler between the Republican and Democratic incumbent Mark Kelly.

“Marc Victor joins a growing list of Arizonans from across the political spectrum who are fed up with open borders, big government corruption, and rising crime,” Masters said in response to Victor’s endorsement. “We are building a broad coalition to defeat the worst Senator in America. This is another major boost of momentum as we consolidate our support against the extreme and radical policies of Mark Kelly and Joe Biden. Live and Let Live.”

Last Thursday, Masters shared a photo of himself from 2010 with former Republican Presidential candidate Ron Paul announcing the former candidate has endorsed the Senate candidate.

“I am honored to be endorsed by [Ron Paul]!” announced Masters in a tweet. “Here’s me and [Ron Paul] hanging out in 2010 at Jekyll Island.”

I am honored to be endorsed by @RonPaul! Here’s me and RP hanging out in 2010 at Jekyll Island. pic.twitter.com/cgdzYjFnHC

Victor had been funded in part by Democrats in an effort to redirect support away from Masters, per the outlet. The Libertarian candidate reportedly received $5,000 from the Save Democracy PAC which brands itself as a nationwide effort to defeat Republican extremism, along with another $5,000 from Defeat Republicans PAC. California board Democratic investor Ron Conway gave Victor more than $45,000 in campaign funds totaling in one-third of the Libertarian candidate’s donations.

The New York Times further cited polling that shows Democrat Kelly with 51% of the vote compared to Master’s 45% and Victor taking 1%.

Roughly 895,000 early votes have already been cast in Arizona totaling more than a third of the 2.4 million votes cast in the 2018 Midterm election. 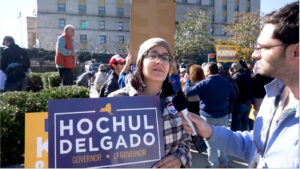 WATCH: Gov. Kathy Hochul Holds ‘Get Out the Vote’ Rally in NYC