Over 10,000 protesters gathered in Ljubljana for the demonstration on Wednesday and chanted “Freedom! Freedom!” The event was organized by groups against the use of COVID-19 vaccine passes on the day Slovenia suspended the use of the Johnson & Johnson vaccine pending an investigation into the death of a 20-year-old-woman.

Health Minister Janez Poklukar said experts would review the case to determine if there is a link between the stroke the woman died from this week and the vaccine she received two weeks earlier. In her statement, Poklukar said the vaccine’s “benefits continue to outweigh the risks.”

“The one-dose J&J vaccine became more popular after Slovenian authorities introduced new requirements for the use of COVID-19 passes, including for going to work in all state-run firms. People must show that they are either fully vaccinated or that they have taken an expensive PCR test,” per AP News.

In response to the demand, Slovenia had purchased an additional 100,000 doses from Hungary.

Participants at Wednesday’s demonstration observed a moment of silence for the young woman.

Later, they attempted to block a major highway north of the city. Tensions escalated when police intervened with tear gas and water cannons. Protestors threw objects in retaliation at police.

A protestor, Katja Zupan, told reporters she was there for the “future” because “this craziness needs to be stopped.”

“If we don’t stand up for ourselves and for mankind, then we are done, we are lost,” she said.

This is the second major clash between police and anti-COVID restriction demonstrators.

In mid-September, 8,000 protesters gathered in the capital to protest “fascism” after the government-mandated COVID-19 health passes in almost all shops, services, or workplaces, according to Euro News. Slovenians also need the pass to access health services, except emergency care. Hospitals are offering on-site rapid COVID-19 testing to those who do not have a pass.

Slovenia also made the COVID-19 compulsory for all government employees.

The protestors threw flares at the Slovenian parliament building before being dispersed by police using water cannons and tear gas.

“Police intervened to disperse the demonstration after protesters began throwing bottles, stones, and firecrackers,” a statement from law enforcement said.

Anton Olaj, Director General of the Slovenian Police, added, “Violence at protests is unacceptable. I call for tolerance.”

This summer, the Slovenian government took over the rotating six-month EU Council presidency from Portugal. The spotlight fell on Prime Minister Janez Jansa, who has been criticized for his close alliance with populist Hungarian leader Viktor Orban and increasingly autocratic policies as well as his disagreements with Brussels. He is an avid supporter of President Donald Trump.

Slovenia has also been criticized for its vaccination rate, which is less than that of other EU nations. Approximately 48% of Slovenia’s 2 million people are fully vaccinated. 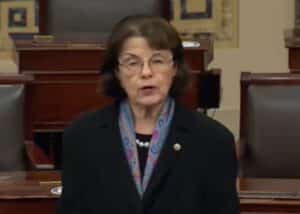