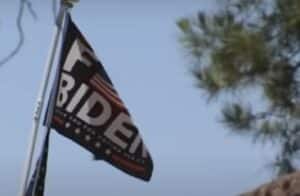 Residents of Munford, Tennessee were unable to force a homeowner to remove an anti-Biden flag some deemed “vile.”

The flag reads “F— Biden and F— You For Voting For Him.”

The mayor, Dwayne Cole, said of the controversial flag “It’s vile. It’s vulgar. It’s protected speech under the Constitution … If I had the authority to make him take it down, I would definitely do that.”

After receiving complaints about the item, Cole consulted with the city’s attorney who confirmed the homeowner is within his rights to display the flag.

“The city does have an ordinance regulating campaign signs but, according to the mayor, that doesn’t apply here because it’s a political flag on someone’s porch, not an actual campaign sign in their yard,” reports WREG Memphis.

One neighbor said the issue is not about politics, but rather about the language. Jay Dewitt, who lives near the residence displaying the flag, told a local news outlet “If it said (expletive) Trump I would have the same problem. I have children. I have two children. We have a lot of children in that community. The kids can see it.”

Munford is not the only town divided over the explicit flag.

In February, residents of Plymouth, Connecticut were “upset their community is being subject to such colorful political expressions” when “vulgar banners opposing the Joe Biden presidency have been spotted above a pair of homes,” the New York Daily News reported.  As in Tennessee, the homeowners were not required to remove the flags. Moreover, Capt. Edward Benecchi of the Plymouth police said his department was as responsible for protecting the homeowners’ rights as they were when protecting the rights of protesters who demonstrated against police brutality.

The ‘F— Biden’ flag also caused a stir in Florida earlier this year. Cape Coral resident John Strasburger hung his expletive flag as a demonstration of his right to free speech. He said “I feel the election was stolen; I think the evidence was there to prove it.”

He also added that without an ordinance from the city compelling him to do so, he would not remove his flag.

In Jackson, Michigan, residents complained about the same style of flags but were unsuccessful in their bid to have them removed. Michigan prohibited the use of profanity in front of women and children until 2015 when Governor Rick Snyder repealed the law.

Andrea Dick, of Roselle Park, New Jersey, refused to remove her cursing flags even after the city threatened to fine her $500 per day that they were displayed. In June, she had six flags outside her home, three of which included the phrase “F— Biden.” 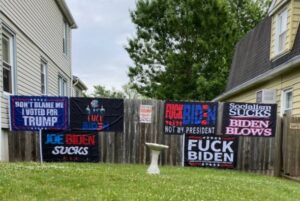 The borough contends that the flags violate an ordinance prohibiting signs with “obscene, pornographic or lewd messages.”

Dick argued “It’s freedom of speech. I have a right to hang my flags where I want to hang them. I’m going to tell you right now, I am not taking those flags down. They’ll have to fight me tooth and nail.”

Many versions of the flags are available online through independent virtual storefronts and Amazon vendors. 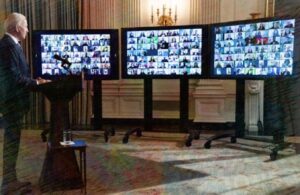