Former Democratic presidential candidate Andrew Yang announced his departure from the party and registered as an Independent on Monday.

Yang announced his shift in a blog post on his website titled “Breaking Up With the Democratic Party.”

“I changed my voting registration from ‘Democrat’ to ‘Independent’ today. It was a strangely emotional experience,” the post began.

Yang went on to explain that he had registered as a Democrat back in 1995 when he was 20 years old. At the time, he voted for Bill Clinton’s re-election.

The former candidate said that he later became very active in Democratic politics and worked tirelessly to come up with a plan to address concerns he had during former President Donald Trump’s presidency — and his infamous Universal Basic Income platform was born.

He wrote that though he has met lots of people that he believes are doing things for the right reasons, “I’m confident that no longer being a Democrat is the right thing.”

“While it was simply a small piece of paperwork, I genuinely felt a shift in my mindset as soon as I signed it,” Yang wrote. He said that he feels he can now be “even more honest about both the system and the people in it.

“The key reform that is necessary to help unlock our system is a combination of Open Primaries and Ranked Choice Voting, which will give voters more genuine choice and our system more dynamism,” Yang stated. “It will also prevent the spoiler effect that so many Democrats are concerned about, which is a byproduct of a two party system with a binary contest and simple plurality voting.”

Yang concluded by writing, “breaking up with the Democratic Party feels like the right thing to do because I believe I can have a greater impact this way. Am I right? Let’s find out. Together.” 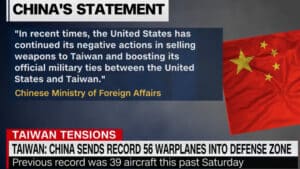